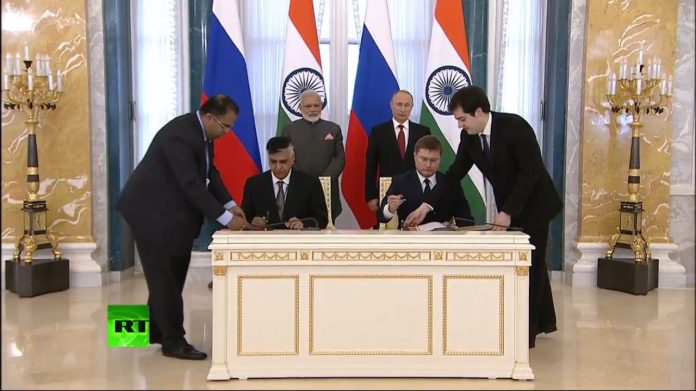 Indo-Russian ties in the diamond sector took a giant leap forward with the signing of a Memorandum of Co-operation (MoC) between The Gem & Jewellery Export Promotion Council (GJEPC) and ALROSA on the sidelines of the St. Petersburg International Economic Forum (SPIEF) in the presence of Indian Prime Minister Hon’ble Shri Narendra Modi and Russian President Vladimir Putin.

It is a historical milestone development for many reasons. Foremost is the fact that it represents the coming together of two giants of the international diamond industry to work concertedly in a number of areas concerning the diamond trade. GJEPC is the apex trade body representing the gems and jewellery export trade of India – the largest cutting and polishing centre in the world both in value and volume terms; and PJSC ALROSA is the world’s largest volume producer of rough diamonds and Russia’s largest diamond mining company.

The fact that the MoC was signed in the presence of the two world leaders, heads of the governments of their respective countries added further weight to the MoC and all it has chalked out to achieve.

The co-operation between the two in areas from trade development to synthetic detection to generic marketing of diamonds will have a game changing impact on the international diamond industry.

Trade Development
It was during the World Diamond Conference held in 2014 at New Delhi, in a session addressed by President Putin and Hon’ble PM Modi that the latter had made the announcement about the Government of India’s decision to set up a Special Notification Zone (SNZ). The first SNZ is up and running for viewing of goods from international mining companies within the complex of the Bharat Diamond Bourse in Mumbai.

The MoC outlines GJEPC’s intention to strive to establish a special tax regime so that direct sales can be conducted out of the India Diamond Trading Centre (IDTC); and for ALROSA to explore the ways of establishing a representative office within the BDB, with the possibility of transitioning it to a sales office.

The MoC also provides for a greater exchange of information on trade figures; and technology between the two bodies.

Generic Promotion of Diamond
The MoC reiterates the avowed commitment of both bodies to the generic marketing of diamonds, with the aim of upholding and promoting diamond consumer equity and sustainable growth of the market.

The GJEPC will share information on the specifics of consumer demand for diamonds in India, while supporting ALROSA’s international efforts (via the Diamond Producers Association) for generic marketing campaigns.

Synthetic Diamond Detection
ALROSA and the GJEPC have resolved to make stringent efforts to maintain separate pipelines for natural and synthetic diamonds.

Co-operation in this area covers exchange of information on cases of mixing; promoting the introduction of legislation for mandatory disclosure of synthetics; GJEPC encouraging the use of ALROSA’s detection devices; and ALROSA joining India’s Natural Diamond Monitoring Committee (NDMC).

GJEPC Chairman Mr. Praveenshankar Pandya commented: “The signing of the Memorandum of Co-operation is extremely significant due to several reasons. Most importantly, it takes forward the aspirations of the Indian diamond industry which is aligned with the vision of our Hon’ble Prime Minister to develop India as an international Diamond Trading Hub, as it outlines GJEPC’s serious endeavour to get a policy framework on taxation put into place for the SNZs. It is also the first step towards ALROSA setting up a rough diamond representative office within the country. For long, GJEPC has been encouraging diamond mining companies to sell rough diamonds directly to the Indian market, and the MoC may well be the first step to realising this goal.”

Commenting on the vexed challenge of the mixing of undisclosed synthetics with natural diamonds Pandya said: “The mixing of synthetic diamonds with natural diamonds, and the consequent threat to consumer confidence, is one of the biggest challenges facing the diamond industry worldwide. The GJEPC has taken the lead in dealing with this issue by setting up of the Natural Diamond Monitoring Committee (NDMC), which has been doing stellar work. Other companies and bodies have also come forward to tackle this challenge. Now, if the two most important and largest entities combine their efforts in a focussed manner, this will no doubt have a tremendous impact on the entire diamond industry”.

Pandya added: “Further, the need for generic marketing of diamonds has been felt by the industry for some time now. For many years, the GJEPC has been making endeavours to galvanise the entire world trade to take concerted and cohesive action for diamond promotions. In this area too, the joint efforts of GJEPC and ALROSA will have an extremely beneficial impact at an international level.”