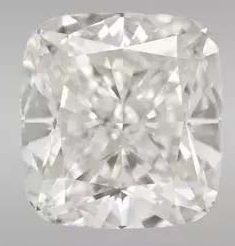 Undisclosed lab-grown diamonds are out there, and the industry needs to deal with that

Yesterday, Gemological Institute of America sent out news that it had intercepted an undisclosed 5 ct. CVD-grown synthetic (pictured) at its Hong Kong lab. The discovery, it says, “marks a significant milestone”:

This is the largest CVD synthetic diamond GIA has examined to date, and the largest reported in the jewelry industry. It had J-equivalent color grade and VS2-equivalent clarity, comparable to a high-quality natural counterpart.… It is worth noting that black inclusions, often contained in synthetic diamond, were not found in this CVD specimen, which could have been mistakenly identified as natural based on microscopic examination alone. This case, therefore, highlights the importance of using advanced spectroscopic instruments as well as conventional gemological techniques to ensure an accurate identification.

It’s undeniable: Undisclosed synthetics are out there, in just about every size and shape, and it’s something our industry is just beginning to get a handle on. And while this is generally considered a worse problem in India and China, we can’t discount the possibility that undisclosed lab-growns are in circulation in the United States.

Given that most big stones—like the one mentioned above—are sent to labs, the biggest problem remains melee, where the screening can sometimes be more costly than the actual goods. GIA recently launched a melee-analysis service, and the results were disconcerting. Of 3,005 melee submitted in one parcel, three turned out to be synthetics.

Which brings to mind a story a jeweler recently told me. He caught a supplier selling some undisclosed synthetics. When confronted, the supplier responded that the industry standard tolerance was “1–2 percent” for melee synthetics.

To be clear: Selling lab-grown diamonds without disclosure is prohibited under the FTC Guides. So the legal standard—and therefore the industry standard—for undisclosed synthetics is zero percent. (And really, if we accept 2–3 percent, won’t that eventually increase to 5 percent and 10 percent? And then it’s game over.)

When we look at other sectors that have dealt with this, there’s a clear pattern: Grower technology improves. Then, detection technology catches up. Right now, we are just in the lag period.

And yes, the ability to detect lab-growns is improving, and we regularly hear announcements of new screening devices. Eventually, I believe that the industry will develop an easy, inexpensive device to test diamonds.

For the time being, though, those machines mostly remain too expensive and complicated for the average jeweler or dealer. So it pays to be prudent—and this is particularly true for retailers who buy from the public. Deal only with people you completely trust. Get everything independently tested. Be wary of deals that appear too good to be true. If possible, ask for a chain of custody. The threat of undisclosed synthetics is no longer theoretical. It is very real.

Alrosa Rough Diamond Sales for First Four Months of 2017 Down...