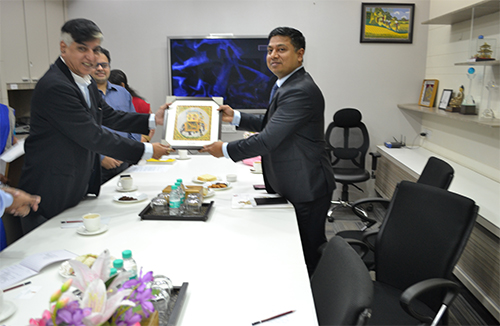 Chairman Pandya requested the Ambassador to put forward a suggestion to the Finance Ministry of Azerbaijan for reduction of import duty on gems and jewellery products as currently, there is negligible trade between India and Azerbaijan.

He also raised the matter of extending an invitation to the jewellers based in Azerbaijan to visit the IIJS Signature show scheduled to be held in Feb 2017.

The Ambassador said he will discuss with local jewellers about enhancing trade between India and Azerbaijan and will request them to make representations to their Ministry for reducing the import duty on diamonds and coloured gemstones.

He stressed on the importance of a delegation of Indian gem and jewellery exporters visiting Azerbaijan to improve the trade between the countries.

ED enquired whether it would be possible hold an exhibition in that country — only for the display of the goods – which suggestion was welcomed and supported by the Ambassador. The best period to conduct such a show, the Ambassador advised, would be either from January to March or September to November.

Rio Tinto Announces Opening of A21 Diamond Pipe at Diavik