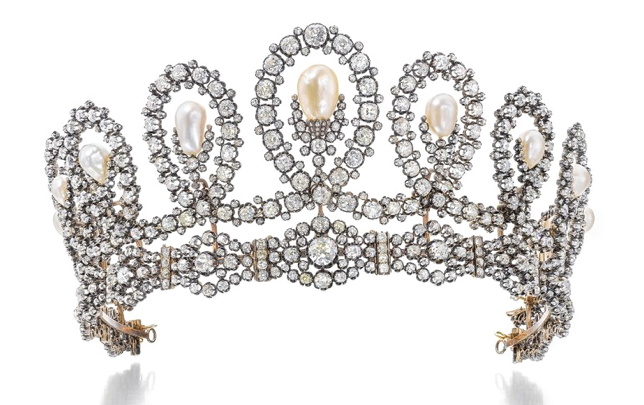 An historic pearl and diamond tiara from the Spanish royal family sold for $1.6m at Sotheby’s Geneva.

It was a gift to Maria Vittoria dal Pozzo from her father on her marriage in 1867 to Amedeo of Savoy, Duke of Aosta, who was later elected King of Spain as Amadeo I (1870 until his abdication in 1873). She became Queen Maria Vittoria of Spain and died nine years later, aged just 29.

It is believed to have been created by Musy Padre e Figli – court jeweler of Turin, and one of the oldest goldsmiths in Europe.

The tiara (pictured) has 11 drop-shaped natural pearls and about 150 to 170 carats of cushion-shaped, circular and single-cut diamonds, on average J-K color, with to yellowish tint, SI-I clarity.

The tiara remained in the family’s possession until last week’s sale in the Magnificent Jewels and Noble Jewels auction. The estimate was $1m to $1.5m.

WFDB: 2018 World Diamond Congress to be Held in Mumbai on...