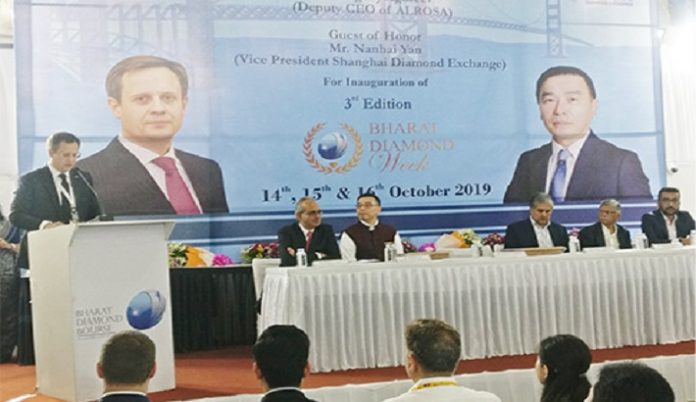 The third edition of the Bharat Diamond Week (BDW), the B2B show for loose polished diamonds hosted by the Bharat Diamond Bourse, was inaugurated this morning by Chief Guest Evgeny Agureev, recently appointed Dy CEO of Alrosa and Nanhai Yan, Vice President of the Shanghai Diamond Exchange in the presence of BDB committee members, leading diamantaires and foreign and local buyers and sellers taking part in the event.

BDB President Anoop Mehta in his Welcome Address said that the bourses had an extra special role to play when the trade faced external challenges and was confronted with difficult market conditions. “We have to come up with innovative methods and solutions, and the BDW is one such effort, which is particularly beneficial to the MSME companies that may not be in a position to regularly participate in global shows,” he said.

Pointing to the encouraging response from exhibitors and visitors, with numbers growing each year, he said, “BDW is now taking flight and is gaining a strong foothold in the exhibition world. No other country and no other show offers the range of polished that is available here – with the widest possible selection of sizes, qualities and cuts.”

According to him the significance of the strong India-China bond that is being forged through interactions on platforms like the BDW lies in the fact that China will play a major role in the driving global diamond consumption in the future. “It is a large and growing economy with enormous potential for diamonds and diamond jewellery, while India is the largest source of polished diamonds.”

SDE VP Yan said it was significant that the BDW was taking place so soon after the leaders of India and China had met and discussed strengthening of trade ties. “India and China are the two largest economies in Asia – together accounting for over 50% of the continent’s GDP. So, it is important that the diamond bourses of both countries also build close bonds. The BDW gives an opportunity for the members of both bourses to interact directly, to negotiate and trade and in the process establish long lasting relationships,” Yan pointed out.

Alrosa’s Dy CEO Agureev also stressed that the bourses had a very important role to play during these troubled times. “It is important to create new opportunities to develop the trade, even as we realise that there are multiple challenges, many of them outside the control of our industry,” he stated.

Agureev stressed that the slowdown being faced by the diamond industry is not a reflection of a drop in the consumers’ love for diamonds, but has been caused on the one hand by “over production of polished based on an overestimation of demand” as well as issues of financing the trade, and on the other hand, it is also the result of external politics in which the industry has little role to play. “The US China trade war and a host of other issues external to our industry have impacted our trade also,” he said.

Calling for innovative responses to such a situation, Agureev informed the audience that Alrosa was near to finalising plans for some new marketing initiatives, which would be rolled out in 2020 in the US and later in the year in India.

BDB Vice President Mehul Shah, who is also the chief organiser of the BDW, said in his closing remarks that the presence of these two guests had a special significance for the BDB and the Indian diamond industry. “Alrosa has always had very close ties with the Indian industry and the BDB, and we look forward to building stronger bonds with the assistance of new Dy CEO Agureev,” he stated.

Shah also said that trade ties between India and China go back many centuries. “Formerly, the famous Silk route saw a robust trade in silks and spices develop between the two countries, and the participation of a large SDE delegation gives us the hope that an equally strong Diamond Route will develop in current times facilitated by close interaction between the BDB and SDE.”

While wishing participants all success, Shah said that the BDW is now a permanent fixture in the industry calendar, and announced that the 4th Bharat Diamond Week would take place at the same venue from October 26-28, 2020.