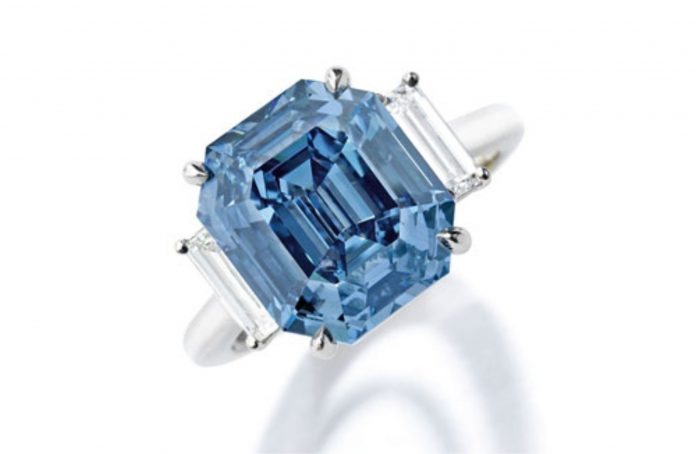 Coloured diamonds were in high demand at a series of auctions across the world over the past few days, with fancy vivid blues topping the results of two separate auctions in New York, and a fancy vivid yellow smashing auction records in Birmingham, London.

Sothebys reported that of the 211 lots up for sale at its New York auction on Tuesday, a 5.69-carat fancy vivid blue diamond was the top seller, being bought for $15.1 million, just over the higher limit of the estimated sale price. The price of the emerald cut diamond of VVS1 clarity translated into a per carat price of $ 2.6 mn.

Also among the best sellers were a fancy intense blue diamond of 2.05 carats mounted on a diamond ring, which sold for over $2.6 million (or above $1.29 mn per carat); and bracelets from Van Cleef & Arpels and Harry Winston in diamonds and blue sapphire, both of which sold well above their estimated sale prices.

Total sales were over $54 million, as 82% of the lots sold. However, what had been desicribed as the largest round diamond to ever be offered at auction, a 110.92-carat stone with VS1 clarity, with excellent polish, cut and symmetry failed to sell.

At another New York auction, conducted by Christie’s on Wednesday, a ring by Graff Diamonds which features two fancy vivid blue diamonds was one of the top lots, selling for $ 12.6 million, well over the estimated price. The diamonds are pear-shaped, modified brilliant cut stones weighing 3.36 carats and 2.71 carats with VVS2- and VS1-clarity.

Meanwhile, across the ocean, headlines were made in London by another outstanding stone from Graff, a 43.59 carat Fancy Intense Yellow Diamond Ring selling for £1.1 million, which is said to be the most expensive item ever sold at Birmingham auction conducted by the 141-year old Fellows Auctioneers. According to the auction house, this was not only the top priced item at any a regional auction house this year, but was also the first seven-figure bid from a regional sale room since 2012.

The yellow radiant-cut diamond of VS2 clarity was the centre-stone of the ring and was set between two white tapered diamond shoulders at 1.62 carats in total.

With the #TrustForevermark Campaign De Beers’ Diamond Brand Positions Itself as...