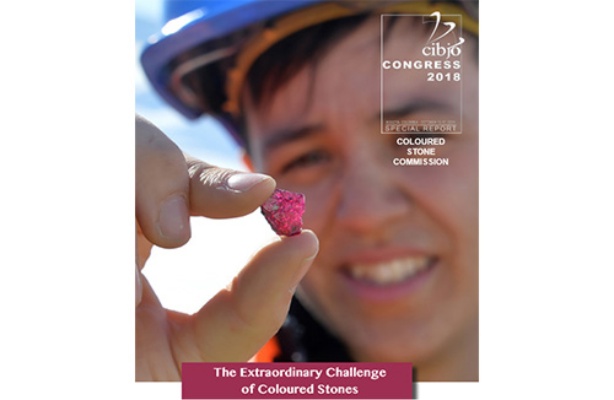 The coloured gemstone sector of the gem and jewellery industry is seeking to develop a framework that defines standards of responsible practices that producers and manufacturers should strive to achieve, the CIBJO Coloured Stone Commission has said in a report released prior to the forthcoming 2018 CIBJO Congress that will take place in Bogotá, Colombia, on October 15, 2018.

Prepared by the commission headed by Charles Abouchar, the report stresses the need to take into consideration the very different conditions that exist in the coloured gemstone industry as compared to the diamond or precious metals sectors.

“More than 80 percent of rough coloured gemstones that come into the pipeline is produced by tens of thousands of artisanal miners, at a great many small-scale mine sites around the world,” it points out.

The authors also note, “The potential of an overly cumbersome responsible sourcing system having unintended consequences is also a critical factor. Policies that could economically disadvantage artisanal or small-scale miners, by restricting their ability to be fully involved in the business, could place at risk literally millions of ordinary people whose lives and communities are currently supported by gemstone mining.”

In addition, it points out that the coloured gemstone supply chain does not have any ‘choke points’ where monitoring can be carried out most effectively, because most, if not all supply passes through them.

After outlining some of the recent discussions on framing of Responsible Sourcing Guidelines, including at the last CIBJO Congress and the recent JCK Show, the Commission notes that “while it would not necessarily be the obligation of the representative organisations endorsing the joint responsible practices document to police and enforce compliance among its members, in the event of any demonstrable gross violation of the document’s provisions by an individual or company, and following proper judicial due process by a recognised body, the relevant representative organisation should be prepared to take appropriate measures against that member, including suspension and/or expulsion from its ranks.

The special report also outlines a project underway to produce an abridged version of the Coloured Stone Blue Book, which will be easier for retailers and their staff to understand and use. This is in recognition of the fact that, with the growing range and sophistication of gemstone treatments and artificial products, the Blue Book has become increasingly detailed, technical and difficult for the layperson to navigate.