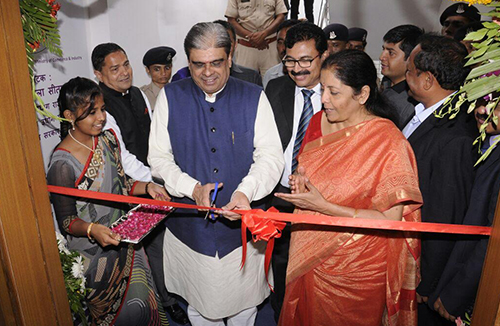 The CFCs being set up in smaller diamond manufacturing centres in India are a project of The Gem & Jewellery Export Promotion Council (GJEPC), and are sponsored by the Ministry of Commerce and Industry (MoC&I).

Delivering the welcome address, Kirit Bhansali, Member of the Committee of Administration (CoA) of the GJEPC lauded this important step being taken through the jint efforts of the GJEPC, the MoC&I and the Banaskantha District Diamond Factory Owners’ Association.

He said that the GoI had approved and sanctioned funds for the setting up of 15 CFCs. Part of these funds have also been released. He noted that after the setting up of the first CFC in Visanagar, the GJEPC has been receiving several representations for the setting up of CFCs from other centres as well. The GJEPC has also submitted plans for CFCs in three more towns – Bhavnagar, Bavsari and Junagarh. He hoped for early approval of these plans and requested that the project be extended up to 2019-20 so that the GJEPC could implement Phase II of the project and complete Phase I. He also urged the Hon’ble Minister for the speedy release of the balance sanctioned amount.

Bhansali also reiterated the industry’s position on the GST, which he said was generally welcomed, but requested for some specific concessions for the diamond export sector.

Smt Sitharaman said that the CFCs would be a vehicle to take forward both the “Make in India” and the “Skill India” goals of the GoI in the diamond sector. Providing the necessary infrastructure and technology and machinery for the MSME sector — which might otherwise find these unaffordable — would boost productivity, product quality and yield, of this sector she opined. The facilities could also be gainfully used for training when they were not actively in use for production by diamond manufacturers of the MSME segment.

Shri Chaudhary, who is also the representative of the Banaskantha constituency (within which Palanpur falls) in Parliament, said that the MSMEs were the backbone of the diamond industry, and that 93% of the production of this industry was exported. Hence, the industry was also making a valuable contribution to the foreign exchange earnings of the country, he added.

Amrut Fosi, President of the Banaskantha District Diamond Factory Owners’ Association spoke on the benefits of cluster development and the usefulness of centres like the one which was being inaugurated to the vast numbers of MSME entrepreneurs.

Sabyasachi Ray, Executive Director of the GJEPC made a presentation on the CFC model and specifically on the production projections for the Palanpur CFC.

Dubai Diamond Conference 2017 to Have a Thorough Discussion on the...