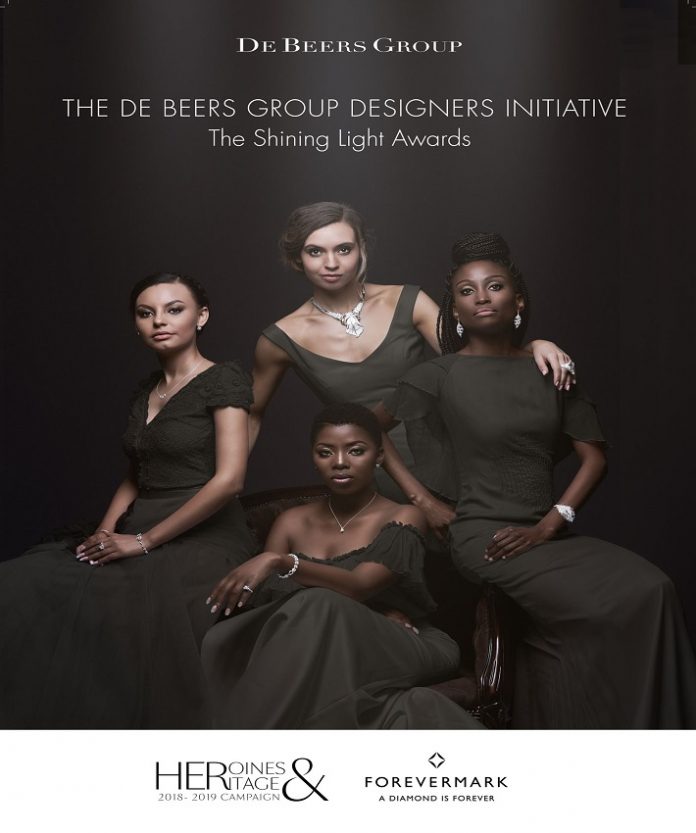 The De Beers Group recently announced the winners of the 2018/2019 edition of the Shining Light Awards.

The winners were felicitated and presented with their awards at the 2019 Shining Light Awards Banquet in Gaborone.

“The jewellery design competition is open to students from De Beers Group’s diamond producing partner countries (Botswana, Canada, Namibia, and South Africa) currently enrolled in a jewellery design and manufacturing programme, or graduates from one of the related programmes in the last two years,” De Beers said, explaining further about the awards. “The 2018/2019 competition marks first-time participation of entrants from Canada, extending the competition’s reach and impact, and bringing the number of finalists to 12, the most ever awarded in a single competition.”

This edition’s theme was ‘Heroines and Heritage’, which the Company stressed “reflects De Beers Group’s commitment to standing with women and girls around the world”.

Elaborating on the theme De Beers said: “When interpreting the theme, students needed to consider how to include design elements that nuanced inspirational women, evoked national pride and featured symbols of strength, heritage, wisdom and beauty.”

The organisation received a total of 110 entries, from amongst which the finalists were selected for their outstanding jewellery designs and unique interpretation of the theme.

After a final round of judging, the winners from each country are:

The winning jewellery designs were “brought to life” for display at the red-carpet banquet, through the craftmanship of jewellery manufacturers from the producer countries. Amongst the creations was a four-piece winning design from Botswana, which was manufactured by KGK, a De Beers a Sightholder, and a company which has its roots in India.

The jewellery was viewed by all attending stakeholders from across the diamond value chain. Present on the occasion were the President of the Republic of Botswana Dr Mokgweetsi Masisi, First Lady Ms Neo Jane Masisi; and De Beers Group CEO Bruce Cleaver.

Pat Dambe, Vice-President of Corporate Affairs and Government Relations, De Beers Global Sightholder Sales, said: “We are committed to promoting youth skills development and participation within the diamond value chain, it is through initiatives of this calibre that their aspirations are realised. Directed by our reason of existence, which is to make life brilliant. At De Beers Group we use diamonds to make life brilliant in much deeper and more meaningful way for the people and places involved in this journey.”

The Shining Light Awards were started as a De Beers Group beneficiation programme “to create opportunities for designers in its diamond producer partner countries” by providing high-level exposure to the retail segment of the international diamond industry. The Awards which were initiated in South Africa 22 years back, have included Botswana and Namibia for 11 years; and, for the first time this year, were extended to participants in Canada.

In addition to attending the gala awards night, the finalists visited Orapa and Damtshaa Mines, De Beers Global Sightholder Sales facilities, the and a factory visit at M Suresh.

At the gala awards event, it was announced that Canada will host the 2020/2021 Shining Light Awards. The host country for the Awards rotates amongst De Beers Group’s diamond producer countries.

Industry
Recently, we’ve been tracking the changing tides of the jewelry industry. From heaps of high-power celebrity collaborations to explosive trends rising out of TikTok,...

Jewellery Industry Reshapes Post-Pandemic with the Line-up of Exhibitions

Industry
Mumbai, September 2021: Logistics companies involved in the movement, storage, and flow of high-value goods, have been directly affected by the COVID-19 pandemic. As...

Retail
Laings the jeweller is set to introduce its Welsh clientele to Patek Philippe next month as it launches its stunning new showroom in Cardiff. With...
- Advertisement -