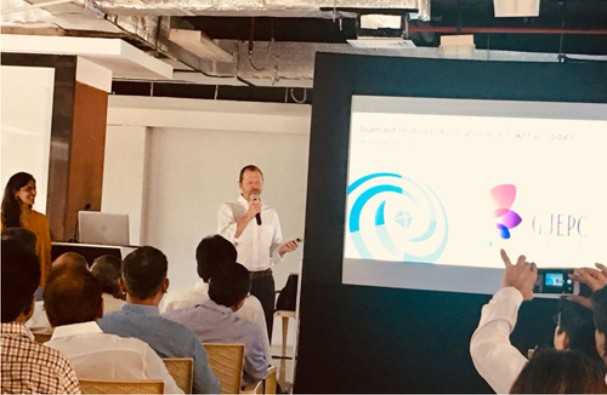 Jean-Marc Lieberherr, CEO of the Diamond Producers Association (DPA) today addressed a Town Hall Meeting at the Bharat Diamond Bourse (BDB) organised jointly with The Gem & Jewellery Export Promotion Council (GJEPC), at which he took the audience through a detailed presentation on the organisation’s marketing plans. He was joined by DPA’s Managing Director for India, Richa Singh, who highlighted various aspects of the presentation.

GJEPC Chairman Pramod Agrawal kick-started the event with a brief address that set the context for the presentation. “We have signed an MoU with the DPA for promotions,” he said. “And we are also contributing to the campaign. Marketing of diamonds is essential to create demand and increase the value of diamonds and diamond jewellery.”

The seven members of the DPA together account for about 75%-80% of the world’s production of rough diamonds. Feeling the need for category promotion in the face of the changing demographics of the consumer and the competition from other luxury segments, the seven largest diamond mining companies formed an association which would not only conduct the generic promotions of diamonds but also defend the natural diamond category on various fronts.

The mission of the DPA’s marketing was defined by Lieberherr as “Helping make the diamond industry successful in the long term”. He emphasised that it was not about the next quarter or even the next year’s results, but for the long term well being of the sector as a whole.

He also explained how the “Real is Rare. Real is a Diamond.” – which he said was a platform, the value proposition – evolved in keeping with the new sensibilities of consumers who may not think relationships are invested with the forever component, but are searching for real and meaningful moments in their relationships. “Love, romance and emotion are the cornerstones of all our marketing efforts,” Liberherr underlined.

He stressed too, that the campaigns created in all markets were based on extensive research and were all based on real situations and real moments between couples. Interestingly, each specific campaign for a particular market captures and dovetails into the cultural context of that country.

“The GJEPC’s contribution is to the tune of about US$ 2 million, and we are very grateful to this pioneering step by an industry body coming forward to contribute towards our marketing efforts,” noted Lieberherr.

He went on to say that the US, China and India were the focus markets for the DPA presently – US as it is the largest market and has shown the greatest growth accounts for a share of about US$ 48 million of the total spend; China and India seen as strong developing markets will have a spend share of US$ 10 million and US$ 9 million respectively. A small budget of US$ 3 million has been allocated for promotions in Europe, mainly through digital platforms.

The DPA had released two campaigns earlier in the USA (launched in October 2016; and November 2017) and will be releasing its third campaign in that market in September 2018. The campaigns in China will be launched in June 2018.

Richa Singh elaborated that in India, the spend would be somewhere in the range of Rs. 60-65 crore; and though they had launched a campaign at the end of last year it was recently suspended, but would soon be put on track again. She said that in India, the campaign was being run in six languages: English, Hindi, Bengali and three South Indian languages – Tamil, Telugu and Kannada.

In India, DPA has also tied up with Yash Raj Films to create four 8-10 min films.

Liberherr went on to outline the various and numerous innovative methods and platforms – including digital, mobile and outdoor displays – that were being used in various markets to ensure that the consumer could be reached through whichever media he/she was most comfortable with.

Lieberherr concluded by calling upon all stakeholders to support and feed in to the DPA’s efforts which was necessary for the ultimate success of the generic promotion plans of the DPA.