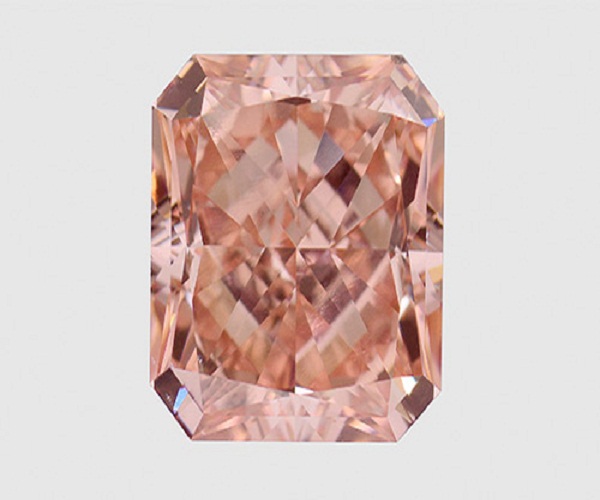 In an article written by Wuyi Wang and Tom Moses in GIA’s Summer issue of Gems &Gemology, the authors describe a large, pinkish orange CVD diamond which was recently tested by the institute’s New York Laboratory.

The synthetic diamond submitted by Unique Lab Grown Diamond Inc. to GIA’s laboratory in New York was a square cut stone, weighing 5.01 ct and with the dimensions of 9.45mm × 9.10 mm× 6.05 mm and was colour graded as Fancy Intense Pinkish Orange.

“Natural diamonds with intense pink-orange colour are very rare, particularly in large sizes,” the authors emphasised and remarked that the stone showed “some outstanding gemmological features”.

“The colour was distributed evenly throughout,” the authors described. “A few small feathers and pinpoints were observable under the microscope at about 20× magnification, and the clarity was equivalent to SI1. Infrared absorption spectroscopy revealed this was a type IIa diamond, with nitrogen concentration below the instrument’s detection limit. A clear and sharp peak detected at 3123 cm–1 is a well-known specific feature of CVD synthetic diamond. The absorption spectrum in the UV-Vis region indicated that the observed body colour was caused by a very strong and broad absorption band around 520 nm.”

The authors noted that this band can be “introduced” to a CVD diamond during its growth. “It creates a colour effect similar to the one from the ~550 nm band in natural pink diamonds,” they said. “There is no report of the ~520 nm band being introduced to a CVD synthetic diamond after its initial growth.”

Further it was found, that in photoluminescence spectroscopy, clear emissions at 737 nm from SiV– and 503 nm from the H3 defect were recorded. Strong emissions at 575 and 637 nm from NV centers were also detected, the authors reported. “As a result, this synthetic diamond showed strong orange-red fluorescence in DiamondView imaging,” they said. “Unlike other large CVD-grown diamonds, this diamond’s fluorescence images hardly revealed the multiple growth layers responsible for its significant thickness. Instead, the multiple growth layers with subtle boundaries could only be detected in high-resolution
cathodoluminescence (CL) images.”

The authors concluded: “Based on all spectroscopic features, we believe that this CVD synthetic diamond was not treated by HPHT annealing after its growth for colour improvement, though heating to a moderate temperature could not be entirely ruled out. The combination of size, colour, and clarity made this the most remarkable CVD synthetic diamond GIA has tested so far.”

Wuyi Wang is Vice President of Research and Development; and Tom Moses is Executive Vice President, Chief Lab and Research Officer, at GIA in New York.