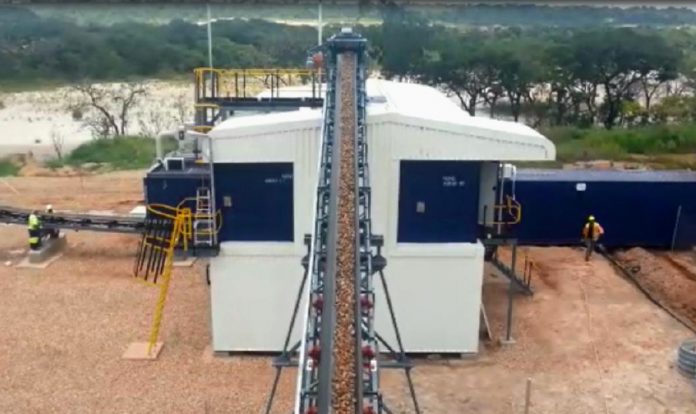 Lucapa Diamond Company and its partners Empresa Nacional de Diamantes and Rosas & Petals, have announced that the new XRT large diamond recovery circuit installed at the Lulo mine in Angola is now fully operational and will be used to sift through all oversized material that the company has been stockpiling since February this year when a large 404 ct stone was discovered.

The circuit is able to process oversize alluvial gravels and with the XRT technology and larger screens it believes it can recover individual diamonds up to 1,100 carats.  The technology is more effective for recovery of higher quality low-luminescing Type IIa diamonds, the Company said.

The decision to stock all oversize material recovered during mining was taken after the recovery of a 404 carat rough, later named the ‘4th February Stone’, which was sold for $16m.

The unit will now process all oversize or coarse gravels from daily mining operations, as well as selectively process the 20,000bcm of stockpiled oversize material over time.

Lucapa CEO Stephen Wetherall described the installation and operationalisation of the new technology as the start of a new phase in the development of the Lulo Diamond Project.

“We’ve seen what the implementation of this XRT technology delivered for Lucara, allowing Karowe mine in Botswana to recover the second largest diamond ever,” he said.

The Company also announced that a second drill rig and crew have now arrived at the Lulo site as planned and a third rig is being commissioned for use by December. This will boost the identification of the primary source or sources of the exceptional alluvial diamonds being mined at Lulo.

Lucapa and its partners will also be carrying out a helicopter-borne Time-Domain Electromagnetic Survey which will help the kimberlite exploration programme in the adjoining region as well as improving target definition on the known targets.

In a separate announcment to the exchanges, Lucapa also confirmed diamond potential at the Brooking project in W. Australia. The Company is acquiring an 80% stake in the project. With these positive results, the Company has already applied for additional exploration licences over an expanded project area.

Pic caption: The XRT and Recovery Sorthouse at Lulo Diamond Mine

Exclusive book signing of The Cartiers to be hosted at Title...