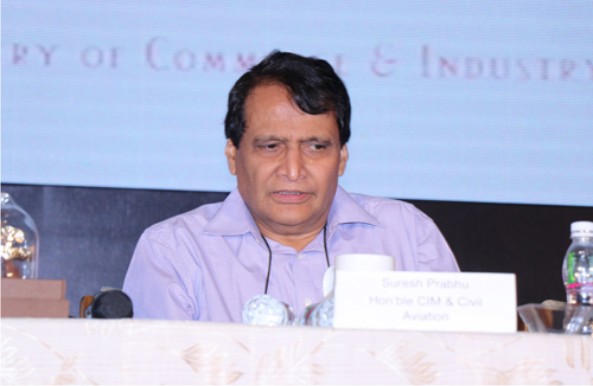 The Banking Summit on “Diamond & Jewellery Financing 2018: Mitigating Risks Effectively” organised by The Gem & Jewellery Export Promotion Council (GJEPC) which was held in Mumbai today, May 11, 2018, got underway with an opening address by the Chairman of the GJEPC, Pramod Agrawal.

Putting the achievements of the industry in perspective Agrawal said: “Our sector contributes 14% towards India’s total merchandise exports, around 7% to India’s total GDP and employs over five million people.”

Agrawal went on to say: “Banks have always played an important role in developing this industry here. However, it is estimated that out of total finance given by banks to all sectors, finance to the gems & jewellery sector is just 1%, that is almost Rs. 70,000 crore, and the industry brings around Rs. 40,000 crore of value addition year on year to the country.”

He explained that the Banking Summit this year was particularly important due to the issues which had arisen earlier in the year which posed a challenge to the gems and jewellery trade.

“The industry has been put into this situation due to certain alleged wrong doings by certain individuals of the trade, who are unfortunately our members, a fact which we cannot avoid,” Agrawal said. “For certain wrong doing of a person which is beyond the dimension of the way this industry works, the whole industry cannot be blamed.”

He went on to stress: “Similarly, the entire banking community cannot be blamed for wrongdoings of few people at a branch of a certain bank. At the same time, the Government and the RBI too cannot be blamed, as the transactions concerned were not in the line with RBI guidelines.”

He made it clear that the diamond sector does not use the facility of Letter of Credit (LC) and Letter of Undertaking (LoU) in its business operations.

“However, every happening teaches us some lessons based on which corrective actions and precautions need to be taken so that similar kind of incident may not happen in future, or misguided individuals do not take the industry and banks for a ride,” the Chairman noted.

Agrawal stressed on the Council’s belief in self-regulation, for which one of the measures taken was setting up of the MyKYCBank project. He also announced that the GJEPC would put forward a White Paper on mitigating risks for diamond and jewellery financing, which, he suggested, may be adopted by banks after due deliberations.

He concluded by assuring the bankers of the GJEPC’s strenuous efforts to promote transparency. He said: “We, as an industry, promise to address the issues to the satisfaction of the banks. In fact this is the only industry which has created arbitration mediums with the banks and parties in case of NPA to achieve recoveries.”

Earlier the Chairman had referred to the GJEPC’s efforts towards the growth of gems and jewellery industry, employment generation and product excellence through the setting up of Jewellery Parks, Common Facility Centres and proliferating training institutions across the country under the umbrella of the Indian Instiute of Gems & Jewellery. The Council was also working very hard to increase India’s market share in global gems and jewellery marketplace; as well as to increase the gems & jewellery pie worldwide by contributing to generic promotions undertaken by the Diamond Producers Association (DPA, an body formed by the coming together of seven of the largest and most significant mining companies of the world.

Hon’ble Shri Prabhu, addressing the meeting dwelt on the vast growth potential of the gems and jewellery industry, which he said was an important sector for the country generating vast employment and contributing significantly to the economy of the country.

Assuring the government’s support for the growth of the industry he however, stressed: “Anything illegal, or fraudulent, the banks will not finance; however, everything bankable, scalable, transparent will be financed.”

He added: “This conclave is being held specifically for the industry and the banks to hold a dialogue in an open forum to work out the best ways for risk mitigation so that by putting proper systems in place, the banks and financial institutions can finance the industry for the mutual benefit of both, the banks, and the industry.”

He stressed that understanding the industry and risk mitigation was important and that the gems and jewellery industry and the banks should together work out methods for this.

“Without taking undue risk, banks should finance the G&J sector, so the industry can grow and banks can also grow,” he reiterated.

The Minister assured those present that the Government was committed to increasing India’s exports. “Rather than merely chasing numbers, we should have a strategy in place, which if it is successful, will automatically result in the desired numbers,” he advised.

The Vice Chairman of the GJEPC, Colin Shah made a presentation on the MyKYCBank initiative of the Council, which would go a long way in tracking information on the players of the industry, and ensuring only genuine businesses functioned in the industry, he said. (See accompanying report.)

Sanju Kothari, Convenor of the Banking, Insurance & Taxation Sub-Committee of the GJEPC presented a White Paper on Risk Mitigation prepared by the Council. (See accompanying report.)

Smt. Rita Teaotia, Commerce Secretary, Government of India (GoI), in her address reiterated the importance of the gems and jewellery industry.

“I am always exhorting the chairman of the GJEPC and other office bearers I meet to ensure financial transparency and corporatisation of the industry. But the banks too must introspect and take measures to protect themselves without giving up the financing of the sector.”

She lauded the MyKYCBank initiative and said that the White Paper had made some significant suggestions.

“A Standing Committee of the bankers and industry should be constituted,” she advised. “This could consider the suggestions of the White Paper as well as assess the functioning of the MyKYCBank platform. The goal should be to build confidence as well as to deepen the lending from the banks.” The latter she raised as a reference for banks to seriously look at increasing exposure to the MSME sector of the gems and jewellery industry.

Shri Dinesh Kumar Khara, Managing Director of the State Bank of India (SBI) stressed that while going forward, the various moves of the GJEPC could possibly contribute to mitigating risk, the events of the immediate past had shaken the bankers and it would take some time for confidence to be restored.

Paul Rowley, Executive Vice President, De Beers, in his speech spoke about the emergence of the market for diamonds and jewellery from a rough period in 2015 to a stable position in the following two years. He expressed the confidence that 2018 would be a good year for the industry.

An MoU was also signed between the GJEPC and the AWDC for co-operation on the MyKYCBank platform.