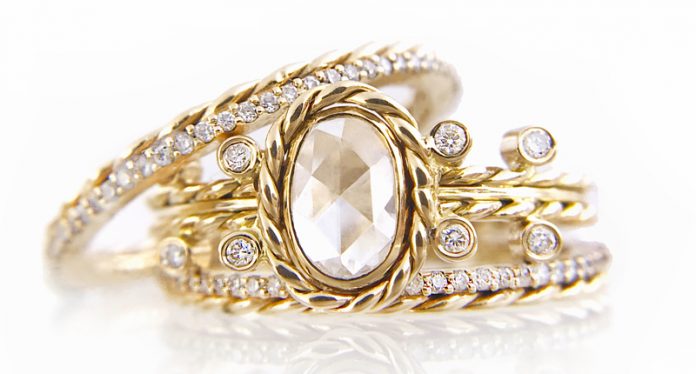 Las Vegas–According to WeddingWire, an online wedding marketplace that connects vendors with couples and party planners, the criteria modern couples use to shop for engagement rings differs according to whether they’re on the giving or receiving end.

WeddingWire asked couples who were married in 2016 to rank different engagement ring shopping criteria in order of importance.

For those who were proposed to, they were most concerned with the visual big picture. The single most important aspect of the ring they received was its overall design and setting.

Next was the type of metal, followed by the type of stone, as in a diamond versus a moissanite or a colored gemstone.

Their fourth greatest concern was the cut of the stone, and the quality of it came in fifth place.

Their last concern was, somewhat surprisingly, the size of the stone.

For the proposer, the quality of the stone was the most important aspect of their engagement ring purchase, something that made sense, Trumpower explained, because the proposer had been educated by salespeople while ring shopping in-store.

So while quality was low on the list of importance for the person receiving the ring, the proposers were more educated about the value of diamonds, and therefore prioritized quality above all else.

The second most important criteria for proposers while ring shopping was the ring’s type of metal, which had also ranked second for the individual to whom they proposed.

Next came the engagement ring’s design and setting, followed by the type of stone. The fifth most important type of shopping criteria was the stone’s cut.

Proposers and those receiving the ring placed the same import on the size of stone–it ranked last out of all the criteria.

Trumpower went into more detail about the results WeddingWire’s research had yielded.

Though couples were in agreement that the size of the stone was the least important part of the ring they gave or received, that didn’t mean they necessarily wanted a small stone.

Forty-nine percent of those polled preferred a center stone that was between 1 and 2 carats.

Twenty-eight percent liked a stone that was less than 1 carat, a finding that was a bit more in line with the overall lack of priority when it came to size.

When it came to the popularity of ring stones, diamonds were the stone of choice for 73 percent of people polled.

Nine percent preferred colored gemstones, followed closely by “raw diamonds,” which were preferred by 8 percent of the group.

Four percent wanted a pearl ring and another 4 percent marked “other,” a category that encompasses stones like moissanite.

Round brilliant diamonds have long been the most popular cut of stone in engagement rings and this held true in WeddingWire’s study, in which 22 percent of people ranked it as their cut of choice.

Princess cuts were a close second at 21 percent, with a big gap between it and the third most popular cut, ovals, which received 8 percent of the votes.

That was followed by emerald cuts at 7 percent and heart cuts at 6 percent. Cushion cuts, rose cuts, marquise cuts and pear cuts each received 4 percent of votes.

When it came to the process of ring shopping, WeddingWire’s survey indicated that 57 percent of people look at rings 1 to 6 months prior to proposing while 24 percent said they didn’t do research at all, though that was overwhelmingly because they were proposing with a family ring.

Both proposers and those set to receive the ring looked at an average of six rings in-store and 49 percent of women from heterosexual couples had tried on engagement rings prior to getting engaged.

Thirty-five percent of those who wanted a ring showed pictures of rings to the proposer from visual platforms like Pinterest and Instagram, and 66 percent of people had shared their engagement “just- said-yes” moments on social media.

Interestingly, while 47 percent of the proposers said that they purchased a customized ring, the person who received the ring had no idea if their ring was customized or not.

Trumpower also indicated that with so much information about weddings, engagements and rings available online and on social media, couples were having difficulty cutting through the noise, with most of them saying they had a hard time making decisions and felt stressed due to the amount of information available.

This underpinned a need for ultimately working with jewelers in-store when it came to engagement ring shopping, as human connection helped cancel out the digital-decision fatigue.

Annie Haak says ‘I do’ to bespoke bridal jewellery