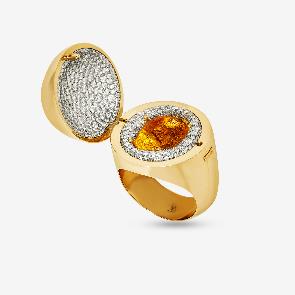 THE 2022 CONNECTING THEME – THE CLASSICS CONTEMPORISED

The Designer Vivarium, curated by jewellery historian Vivienne Becker, showcasing  the work of individual designer-jewellers from around the world, returns to  GemGenève this May, with three returning designers and  four new international names.

GENEVA, 29 MARCH, 2022 – As always, Vivienne, aided and abetted by Ida Faerber, has  scoured the globe for independent, under-the-radar designers, each with a strong concept, a  well-defined design direction, individualistic point of view and sophistication of  craftsmanship and use of materials. She explains too that as a historian she particularly  appreciates designs that acknowledge and respect the long and rich history of the jewel, its  rituals and traditions, while at the same time challenging perceptions of the role and meaning of the jewel. The styles represented in the 2022 Designer Vivarium, as always, are all very  different from each other, showing the breadth, depth and versatility of expression in today’s  world of contemporary jewellery.

The idea for a contemporary designer showcase originally came from the GemGenève founders,  Thomas Faerber and Ronny Totah. An important part of their mission in establishing the show was  to promote and nurture talent and ingenuity in today’s jewellery world, to give a voice and a platform

to individual designers, the innovators who push boundaries, challenge entrenched conventions  and subvert traditions in order to keep the millennia-old art of the jewel dynamic, exciting and  relevant, capturing the spirit of our moment in time for future generations of jewellery collectors.

This will be the fourth edition of the Designer Vivarium, and as in previous years, visitors will have  the opportunity to meet the designers, and talk to them about their creative vision, their artistry and  craftsmanship, and so immerse themselves in the spirit of seek-and-find, the stimulating sense of  discovery and exchange of ideas that is so much part of the GemGenève character.

HE DESIGNERS AT A GLANCE

Aline Debusigne, Switzerland: Having trained in the fields of ancient history and philology, Basel based Aline started her own jewellery business in 2018, drawing on her long-term passion for history,  and her fascination with collections of ancient and antique jewels and their craftsmanship. Her  resolutely contemporary designs, of ingeniously-conceived, architectural structure and carefully  considered balance and proportions are all hand-crafted, in Geneva and Paris, using traditional  techniques. Her signature marriage of modernity and antiquity is expressed in her use of old-cut  diamonds, in a variety of shapes, often scattered, seemingly at random, in near-invisible settings, to  generate a shimmering play of light. Her white gold is left natural, without rhodium plating. Aline  also focuses intently on sculptural, ergonomic shapes, to create jewels to move with the body, like a  second skin, balancing ornament with wearability. She sums up the key characteristics of her style as light, abstraction, movement, body-fitting and contemporary.

Sean Gilson, USA: Gilson is an American artist-goldsmith who hand-crafts each of his jewels himself,  in his workshop in Connecticut and his atelier in New York City. Gilson studied fine art before training  as a goldsmith with renowned European and American metalsmiths, and he brings an art-infused  graphic, modernist approach to shape, form and material. He forges gold into powerful, geometric  shapes, burnishing it with a rich finish reminiscent of ancient gold work; he works with different  species of pearls, natural, Akoya, South Sea and baroque pearls, using their shape and lustre to  create dynamic structures, or mixing sustainable coral with black Tahitian pearls in an entirely fresh  combination of colour, sheen and shine. Sean will present a series of new jewels at this year’s  Designer Vivarium.

Regina Gambatesa, Italy: After studying architecture at the University of Naples, Regina moved to  Bari, in Italy’s Puglia region, and in 1986 began to create her highly conceptual jewels, conceived, she says, as “ritual objects to bring you closer to your interior.” In 1999, Regina opened her experimental exhibition space, showing her collections and one-of-a-kind creations, some organic, others geometric, with the aim of stimulating a new dialogue around the meaning and power of the jewel. She works with light, with luminous materials to convey and perpetuate the deep mysticism and spirituality long associated with the jewel. Through her jewels, and architectural, Regina explores the relationship between body and ornament. She fuses deep-rooted cultural references and associations with elements of fantasy and  imagination. She explores the jewel’s power of communication, finding new ways for the jewel to tell  its age-old story, to revive ritual and the energy of the talisman, and most of all to generate an  emotional response, deep in the unconscious.

Saurabh Bhola, India: Based in Delhi, India, Saurabh Bhola studied jewellery design at the Fashion Institute of Technology, New York, under the direction of Maurice Galli, head of the creative team at Harry Winston. Having gained his degree, he was selected by a panel from Tiffany & Co. to be part of a workshop called The Workshop Without Walls. He began to 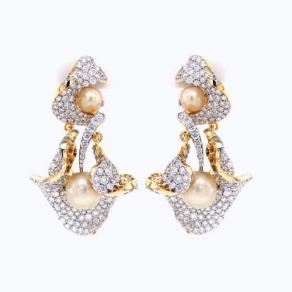 design for Tiffany but returned to India to help his parents in the family jewellery business, and had to shelve his own contemporary ideas to work on traditional Indian jewellery. However, during this time he was inspired by the antique gemstones, handed down through generations, that passed through his hands, and these stones, with their history and powerful presence, re fired his imagination and his determination to forge his own contemporary style. In 2018, a chance encounter with an historic Navratna bracelet, of royal provenance, was the spark he needed to embark on his first collection, called Metamorphosis, in which the antique stones from the bracelet were given a new life in organic, sculptural settings, paying homage to the ever-changing natural world, and the fast changing world around him. The collection won him the Award for Centurion Emerging Designer of 2020. All Saurabh’s jewels are one-of-a-kind.

Oktaaf, Spain: A very young brand, born in the metaverse, Oktaaf is the brainchild of Ainoa Casullas Corres, a Spanish jewellery designer and Karel de Beule, a Belgian internet entrepreneur. Oktaaf jewellery is a dialogue between antiquity and modernity – the youngest of jewellery collections exploring the oldest, earliest roles of the jewel. Each Oktaaf jewel is conceived around an ancient artefact, although de Beule emphasises that they do not simply ‘envelop’ an antique object, but set each in an entirely new context, giving it new meaning and relevance today, telling its story from an anthropological point of view, and most of all highlighting the role of the jewel as age-old expression of personal identity or tribal identity, a personal or social style signifier. In Oktaaf’s jewellery, a Mesopotamian glyph seal, 7000 years gold, relates to a modern hashtag, its graphic impression set into a strikingly contemporary cocktail ring, while Egyptian hieroglyphs are viewed as today’s emojis. As a child of its time, Oktaaf also pushes boundaries of technology, presenting a jewel, a pair of cuff links, designed entirely by Artificial Intelligence. Above all, say the founders, each Oktaaf jewel is an emblem of ‘timeless humanity.”

Gaelle Khouri, Lebanon: Born in Beirut into a family of academics, aged 20, Gaelle Khouri left Lebanon for New York City to study, with the plan of pursuing a career as an economist. However, her plans were scuppered by her love of design and a desire to work in a creative industry. She spent some time working with Oscar de la Renta, and then Lebanese designer Elie Saab. Returning to Beirut, with newfound confidence, she had a clearer vision of her way forward and began studying jewellery, preparing to embark on a career in the jewellery world. Celebrating her fifth year as a designer jeweller, Gaelle showcases her new 2022 collection, La Trahison de l’Objet, at the Designer Vivarium. Conceptual and cerebral, the collection contemplates the philosophical ideas that so fascinate Gaelle Khouri and guide her work. Through these jewels, she examines concepts of beauty and our relationship to the objects in the world around us. The collection is inspired by two branches of philosophical thought, Empiricism and Innatism, each exploring the nature of beauty, our differing perceptions, ideals and judgements. As always, in these dreamy, sculptural jewels, Gaelle Khouri connects the intense physicality of the jewel to the intangible realm of thought.

Philippe Lauras, France: Having grown up in an artistic environment, Philippe Lauras says he knew he was destined to follow a creative path. He enrolled in the Ecole de Joaillerie de Paris (BJOP), and at the same time studied gemology, drawing and sculptural modelling. He began working in 1980 and was fortunate to train in two of the most-renowned Parisian High Jewellery ateliers where he learnt traditional jewellery-making techniques, requiring complete dedication, patience, rigour and precision. Over the years, he acquired the technical and artistic know-how needed to collaborate with designer-jewellers and artistic directors of international jewellery houses. In 1995, he opened his own workshop, close to Paris, creating one-of-a-kind jewels for leading Parisian jewellery Maisons. Most recently, he launched his own collection, presented here in the Designer Vivarium for the first time. The Falbala collection began, he says, with a simple of a ribbon, sometimes tied around the finger, or looped into an earring to frame the face. Each jewel is entirely hand-crafted, to achieve the floating, flirtatious silkiness of a ribbon. He focuses on balance and fluidity of curves and swirls that are often asymmetric. Jewels are light to achieve supreme comfort and articulated to create movement, to bring the design to life.

Despite the international scope of this group of designers, and their intense individuality of concept,  an overarching theme has emerged in this year’s Designer Vivarium: a re-imagining of classicism.  This can be seen, literally, in Oktaaf’s celebration of meaningful objects from classical antiquity; in  Saurabh Bhola’s reworking of organic themes and in Philippe Lauras’ rejuvenating of the ribbon and  ribbon bow, one of the most lyrical and ubiquitous of classic themes through jewellery history. The  Designer Vivarium 2022 becomes a Cabinet of Wondrously Contemporary Classicism.