A new study by bespoke jewellery brand, Taylor & Hart, reveals how there has been a rise in 228% demand for ‘genderless jewellery’ and a 69% increase in year on year interest in ‘male engagement ring designs’, showing a shift in buyer behaviour. The study also shows the countries in the world where demand is highest.

Demand for male engagement rings soars across the world

The study also reveals that London is the UK’s capital of male engagement rings, with 22,800 yearly searches. The vibrant fashion scene and acceptance of non-conformity is on the rise, this could mean that genderless engagement rings are set to be the next big trend!

What does this mean for engagement ring design?

“A few years ago I had a customer who was planning to propose to her boyfriend. She reasoned that marriage is always a two-way commitment, so why should it only be the man’s responsibility to propose? She loved being able to design her boyfriend an expressive and personal engagement ring, and since then I’ve worked with more and more women who feel the same. I really believe the industry should be embracing this new normal.”

More women are now proposing to their other halves

Is the stereotype of a man getting down on one knee something of the past? Taylor & Hart’s study reveals that the number of women who have proposed has tripled since 2010, suggesting modern couples are challenging attitudes towards dated traditions. Taylor & Hart found via a survey* found that 70% of men would be happy if a woman proposed to them, and although this could be a reason why we’re seeing a rise in demand for male engagement rings it is important to credit LGBTQA+ community for this trend.

Genderless fashion is the future, 57% of Gen Z shopping genderless

The last few years have seen a growth in fluidity when it comes to gender, especially in fashion and jewellery. The study from Taylor & Hart reveals that searches for ‘genderless clothing’ have been consistently rising since 2014 and 57% of Gen-Z are shopping for genderless fashion.

Big fashion brands such as Gucci are leading the way for this movement. Face of the brand, Harry Styles, is often seen wearing their gender-neutral pieces and was recently the first man on the cover of Vogue wearing a dress. High street stores such as ASOS are also blurring the lines of gendered clothing by offering extensive gender-neutral ranges.

While the average man is unlikely to start dressing in red carpet-worthy gowns, men are beginning to experiment with different styles and wear more jewellery. The infamous Connell’s chain from TV show, Normal People, saw a 500% increase in searches when the show aired in 2020.

While the fashion industry might be taking charge, genderless jewellery will follow suit. From statement necklaces, signet rings to genderless engagement rings, Gen-Z are finding a way to express themselves that goes against the grain and breaking down gender stereotypes as they do it! 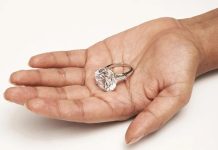