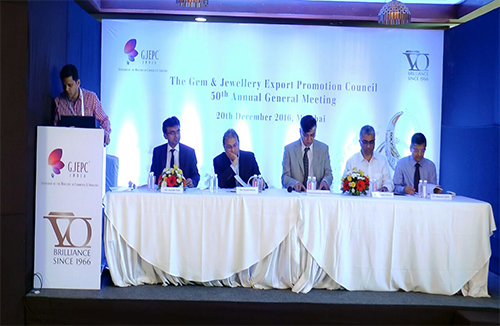 For one, the body approved changes in its code of ethics, necessary to complete the process of the GJEPC induction as a member into the World Federation of Diamond Bourses (WFDB).

The AGM also approved the formation of the Trade Disciplinary Committee (TDC) by the GJEPC, together with the Bharat Diamond Bourse (BDB) and the Mumbai Diamond Merchants’ Association (MDMA).

The 21-member TDC, which is to be constituted with three representatives each from the three constituent trade organisations, with the remaining 12 being inducted by the initial nine members, will take up matters of misconduct related to the gems and jewellery trade like fraud; cheating; dealing in CVD, man-made, synthetic, lab grown, and unnatural diamonds without making disclosures; making false and incorrect inscription on gem and jewellery; non-compliance and/or breach of business practices (including financial disputes), customs and ethics; issues relating to bankruptcy of persons in trade more particularly as per trade customs and practices; any other or further matter that the TDC deems fit, in relation to the Industry.

The members of the TDC will have a term of three years and a complete process has been drawn up for its functioning; and the redressal of complaints and grievances.

One area that has been considered of particular importance by the leadership of the GJEPC is that of generic promotion of diamonds. While the organisation, along with De Beers, launched the promotional campaign – “Ek Heera Aapke Heere ke Liye” – and also supported international efforts, the AGM once again put its support behind such endeavours and gave the approval for enhancing efforts on the generic promotion front.

Corporate Social Responsibility has become an important aspect of corporate functioning over the last many years and the GJEPC has always done its bit towards this. The AGM reiterated its commitment to CSR activities and of increasing its contribution in this area in the 50th year of its existence. Accordingly, the GJEPC has decided to donate a certain amount from its surplus generated in the Financial Year 2015-16 towards charity in schemes which have been mooted by the Honorable Prime Minister of India, Shri Narendra Modi,

The GJEPC’s AGM, chaired by Chairman Praveenshakar Pandya also decided to use demonetisation as an opportunity to ensure that the gems and jewellery industry works in an organised manner and to introduce a cashless system in its functioning.