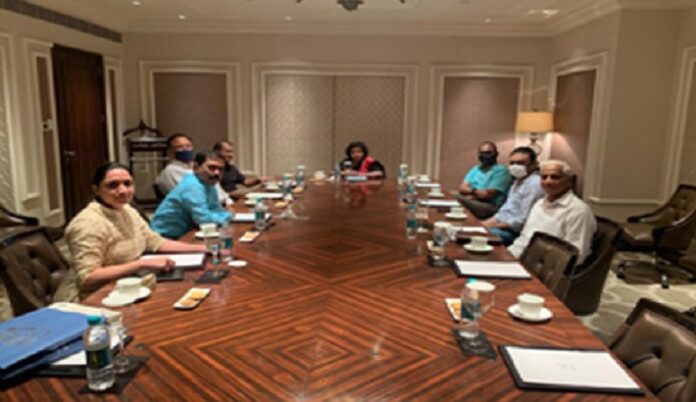 The GJEPC team, led by its Chairman Colin Shah, visited Mrs. Rupa Dutta, Economic Advisor, MoC&I on 26th August, 2020, to bid her farewell and thank her for her immense contribution towards the gem and jewellery industry over the last many years. Mrs. Rupa Dutta was working as an Economic advisor in the Department of Commerce, from April 2012 onwards, and was in charge of the gems and jewellery sector.

Expressing his gratitude towards her, Colin Shah said, “A praiseworthy quality about Mrs. Dutta, which we have noticed in our regular interactions with her, is that she is open to new ideas and believes in action- and result-oriented schemes. One of her recent and biggest successes is her role in the implementation of the Common Facility Centre (CFC) Scheme for our sector. She has also played a key role in resolution of various procedural and policy hurdles affecting the gem and jewellery exports. I wish her the best in her future endeavours.”

Mrs. Rupa Dutta has worked extensively, participating in various international forums and discussions during India’s chairmanship of Kimberley Process in 2019. She has been the driving force in strategizing and giving direction in the Kimberley Process.

Sabyasachi Ray, Executive Director, GJEPC, said, “The industry has been lucky to have a person like Mrs. Rupa Dutta to deal with our concerns. She has been a guide and mentor, and under her guidance, the industry witnessed a host of reforms to drive growth in the sector. Apart from setting up CFCs in the country, Mrs. Dutta has been instrumental in policy reforms for the sustainable development of the industry. GJEPC wishes her all the best in her future pursuits.”

Mrs. Rupa Dutta has served in a number of Ministries, including Department of Commerce (DOC), Ministry of Commerce & Industry, Ministry of Women and Child Development, Planning Commission, where she worked for nearly twenty years, and as Registrar in the Board of Industrial and Financial Reconstruction (BIFR) for four years.

How to select a perfect jewelry gift for your anniversary