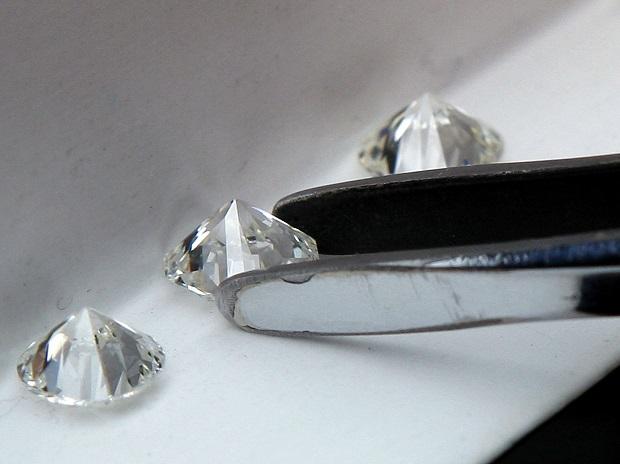 The sharp cut in the rate of GST (Goods and Services Tax) on polished diamond has brought much cheer to processors and jewellery exporters.
Around 94 per cent of the diamonds processed in the country would attract 0.25 per cent GST effective Friday, down from three per cent earlier, following the GST Council’s decision in this connection on Thursday. The remaining six per cent of diamonds processed in India and sold directly to consumers, however, would continue to attract three per cent GST.
The Council’s decision comes as a major relief for diamond processors and the entire value chain, including angadias, and helps overcome ambiguity in the tax structure, besides avoiding the possibility of mis-declaration and tax evasion.
“We were trying to convince the government by citing the example of the diamond polishing business in Israel. We had made representations to the finance minister in October about the complex GST structure and the working capital blockage arising out of that. Around Rs 4,500 crore (Rs 45 billion) of working capital was blocked till October, due to the implementation of GST in July. The amount of working capital blockage must have gone up to Rs 7,500 crore (Rs 75 billion) by now, which has not only destabilised the processing cycle but has also hit exports,” said Praveen Shankar Pandya, former chairman of the apex industry body, Gems and Jewellery Export Promotion Council (GJEPC), under the Ministry of Commerce.
Since the government had levied 0.25 per cent of GST on rough diamonds and three per cent on polished stones, the industry would use the angadias, an unofficial courier service used to transport rough diamonds from Mumbai, India’s largest trading hub, to Surat, the country’s largest processing centre. The diamonds would be polished in Surat and sent back to Mumbai in the hands of these very angadias as rough stones, resulting in mis-declaration of parcels for tax evasion.
Barring India, all major diamond processing centres across the world have introduced friendly tax structures to ensure ease of doing business. Most importantly, a number of them have declared ‘zero’ tax rate to encourage investment and consequent employment generation in this sector.
While levying 0.25 per cent of GST on rough diamonds, Union Finance Minister Arun Jaitley had, in June 2017, said that the objective of GST levy on rough diamonds is to trace the movement of stones from one channel to another. Jaitley reiterated this mindset on Thursday while justifying the need to levy GST on processed diamonds.
“Many jewellers have started getting GST refunds now, against claims made in July 2017. Hence, the government’s claim for refund in 60 days is not real.

Such a long period of working capital blockage had hampered trade. There are around 10 layers through which every diamond has to pass through during the entire value chain of processing. On every channel, a levy of three per cent GST worked out a huge sum stuck in the form of tax. The changed rate of 0.25 per cent therefore would certainly help boost exports in the coming months,” said a large diamond jewellery exporter.
Data compiled by GJEPC shows that net exports of gems and jewellery shot up to $2.78 billion (Rs 180 billion) in November 2017 from $1.77 billion (Rs 120 billion) during the same month last year.
The sudden spurt in jewellery demand, especially from the US, has brought cheer to Indian exporters. Retailers in the world’s largest jewellery market (US) saw increased consumer footfalls. Some of the surge is also due to base effect and other factors.
The phenomenal growth in November has covered a part of India’s loss in gems and jewellery exports between April and October. During the first seven months of the current financial year, the value of outbound shipments fell 13.18 per cent to $19.57 billion (Rs 1,261.72 billion) from $21.73 billion (Rs 1,453.31 billion) in the same period last year. “There has been a phenomenal growth in business recorded in the US. We expect 6-7 per cent growth in sales this year over last year,” said Mehul Choksi, managing firector, Gitanjali Gems, one of India’s largest exporters of branded diamond jewellery to the world.
Meanwhile, Surendra Mehta, National Secretary, India Bullion and Jewellers Association (IBJA), said in a twitter post, “Different GST rate on diamond & precious stone will enable jeweller to split bill in 3 part for sale of jewellery i.e. gold/silver, diamond/precious stone and labour. Govt may lose thousand of crores on this. Also tracebility of customer will be lost.”