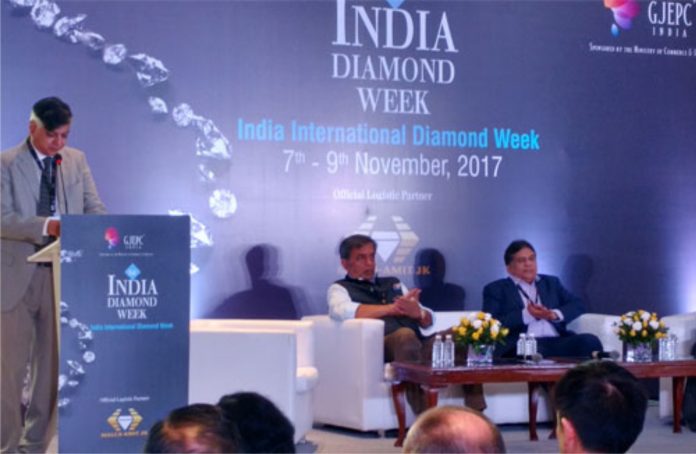 Prior to this, GJEPC has held successful Diamond Weeks in the USA and China, but this is the first time that a show dedicated to the direct interaction between manufacturers of loose diamonds and international buyers is being held within India.

Inaugurating the three-day event, GJEPC Chairman Praveen Shankar Pandya said that a show focused on the one-on-one direct interaction between buyers and sellers had proved to be extremely successful. “Experience has shown us that this is the most appropriate format for trading in loose diamonds and it enables buyers to find the right goods more easily. Council has already held Diamond Weeks in the US and China and going forward we plan to organize similar events in other countries too,” he said.

Commenting on the significance of the show taking place in India, Pandya told the visitors that coming directly to largest centerForevermark Tribute for polished diamonds in the world would enable them to see an entire range of goods within a relatively short span of time.

“In recent years, there has been a gap between prices and movement of rough and polished, leading to some pressures in the midstream,” Pandya said, opining that the lack of category promotions over the last decade had hit the industry badly. Welcoming the revival of generic promotions by the DPA and the increased marketing spend announced by De Beers for its Forevermark brands, Pandya assured those assembled that the GJEPC had, and would continue to, contribute towards such efforts to drive demand in key markets.

He also touched briefly on the need to counter challenges on issues of sustainability and increase transparency so as to strengthen consumer confidence in diamonds. GJEPC would work closely with both upstream and downstream players to achieve this, Pandya said.

GJEPC also felicitated senior diamantaires Reuven Kaufman of the Diamond Dealers Club, New York (DDC) and Alex Popov of the World Diamond Mark for their contributions to the industry. Kaufman was the first to propose the concept of a Diamond Week, a format that has proved to be immensely successful and is now implemented in many diamond centers. He has also been instrumental in organizing the India Diamond Weeks in New York at the DDC. Popov has helped to strengthen ties between the Indian and Russian diamond industries over the last many years in manifold ways. Council also publicly acknowledged the contributions of the leaders of the visiting delegations from China, South Korea, and Turkey.

During the first two days of the show, buyers and sellers will follow a pre-decided schedule interacting within the framework of fixed time slots. The third day will be reserved for open interaction.

Thanking all the international visitors, Sabyasachi Ray, ED, said that the schedule had been drawn up by Council through a buyer-seller matching exercise based on inputs from visitors and exhibitors. He assured the participants that they could actually transact business and purchase goods at the show which will then be directly exported to their country with the help of the Logistics Partner, Malca Amit.

Diamond Delights: 6 Jewels From A. Link

One month left to nominate for PJ Awards