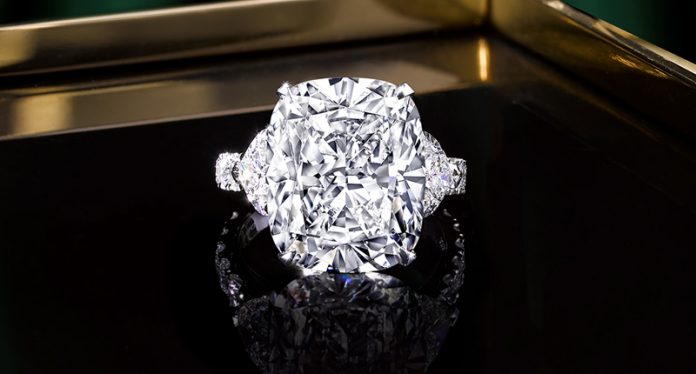 London—After more than a year of detailed analysis, cutting and polishing by a team of experts, Graff Diamonds has begun unveiling the diamonds cleaved from the 1,109-carat Lesedi La Rona.

Mining company Lucara recovered the Type IIa diamond, which weighed 1,111 carats before cleaning, at its Karowe mine in Botswana in November 2015.

It was huge diamond mining news, as the stone that would later be dubbed “Lesedi La Rona,” or “Our Light” in Setswana, was the second largest rough diamond ever found. It is topped only by the 3,106-carat Cullinan unearthed in South Africa in January 1905.

Lesedi La Rona went up for auction at Sotheby’s London in June 2016, where it was expected to go for more than $70 million but did not sell.

RELATED CONTENT: Why the Biggest Rough Diamond in a Century Failed to Sell

In September 2017, almost two years after the diamond’s discovery, Lucara announced that Graff Diamonds—which is owned by billionaire diamantaire Laurence Graff, known as the Harry Winston of the modern age—had paid $53 million for the tennis-ball sized stone.

The 1,109-carat diamond was a natural addition to the company’s inventory—at the time of purchase, Graff Diamonds already owned a 373.72-carat chunk that broke off the Lesedi La Rona, paying $17.5 million for it.

Now, Graff has started to reveal the cut and polished stones resulting from this history-making piece of rough.

Graff Diamonds is not releasing detailed information about how many diamonds have been cut from Lesedi La Rona so far, saying only that it expects the stone to yield about 60 diamonds ranging in size from less than a carat to more than 100 carats, with the main stone, which will be the most exceptional, still in polishing.

The company said each will be D color and of “exceptional clarity,” and will be graded by the Gemological Institute of America before being inscribed with “Graff, Lesedi La Rona” and a unique GIA ID number.

When asked about the progress on the 373.72-carat rough diamond it also owns, a company spokesperson said that for now, its focus is on the Lesedi La Rona.

Industry
Professional Jeweller and WatchPro have decided to join forces for a single awards dinner that will celebrate the energy, fortitude and brilliance of our...
- Advertisement -

ALROSA’s Auction of Coloured Polished Diamonds in Israel Earns US$ 1.2...