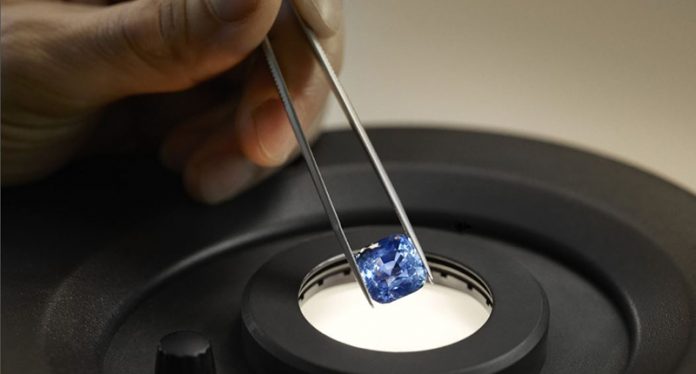 Lucerne, Switzerland–In an effort to create more transparency, Gübelin Gem Lab is partnering with a technology company to create a blockchain for colored stones.

The lab announced Tuesday it is working with emerging tech company Everledger to develop the program that will trace gemstones from mine to market, which it calls the first in the world of its kind.

The project comes as part of the lab’s Provenance Proof initiative, a long-term program designed to develop and provide technologies to the gemstone industry to make it more transparent.

“We have a deep belief that the level of transparency we have in the gemstone industry is not fit to fulfill the requirements that today’s critical consumers have,” Gübelin Gem Lab Managing Director Daniel Nyfeler told National Jeweler Tuesday.

“We as a gem lab believe that we have a certain credibility or at least some kind of tech savviness that puts us in quite a good position to develop technologies that can help achieve the goal of transparency.”

That already includes its “Emerald Paternity Test” and now, the creation of the blockchain.

A blockchain is a digital, decentralized ledger of transactions, which constantly grows as completed “blocks” are recorded.

Blockchain technology is secured using cryptography, which means that no one can tamper with the data once it has been recorded, and because the data is stored across its network, it eliminates the risk that comes with holding data centrally.

The technology will engage any and all parties involved in the lifecycle of a gemstone. It can be applied to every colored stone.

The blockchain Everledger is building, expected to launch within the next six months, is a “digital look book,” Nyfeler said, with each gemstone having its own log of information.
RELATED CONTENT: Analysis: The State of the Colored Stone Market
It will aim to track a stone as early in the supply chain as possible and will build a record of each individual rough gemstone. The owner or custodian of the stone is then entitled to contribute certain information to the “look book”–as well as see certain formation–through to, and including, the end consumer.

“Overall, you get a kind of complete history of that stone,” Nyfeler said.

They are designing it to be easy to use on the front end.

Nyfeler said they are building their technology based on smartphones (as they’re early in the development process, they are still working to figure out, beyond that, what form the tech will take). A blockchain for a gemstone will be started by entering simple data, such as its weight or a picture of the stone.

When asked about possible barriers for use for artisanal miners, he said the cost to use the blockchain technology is very small: “It’s indeed something that should function with the guy who is sitting in the small-scale mining, as long as he has a smartphone and is willing to give transparency on what he’s doing.”

While it is designed to give supply chain transparency, it wouldn’t be able to stop someone from swapping a mined stone for a synthetic or treated stone somewhere along the way.

“But the good thing is that once it gets detected, you can basically trace it back and most likely find the place where something went wrong,” Nyfeler said. “That’s due to the fact that the blocks are immutable.”

This is also why the lab believes that the blockchain paired with the emerald paternity test provides an “extremely powerful package.”

“The combination of something physical with something digital, we believe, really takes a step forward in our overall attempt to bring more transparency to our industry.”

The lab wants to expand the technology, or something similar to it, to all gems.

Nyfeler said the current type of nanoparticles they use on the emeralds can also now be applied to pearls and Paraiba tourmaline.

The lab is developing other solutions, likely also based on nanoparticles, for rubies and sapphires, though they are only at the lab trial stage for those now.

“We want to develop the technologies that, again, is something physical, that we add to the stone or write in the stone, something that is invisible and that becomes part of the stone and can be retrieved or read at any late stage.”

Since the investment required by anyone interested in the paternity test is quite large, Nyfeler said the lab also is partnering with a consultancy company in the artisanal mining sector on a project to see how the technology can be applied in such an environment.