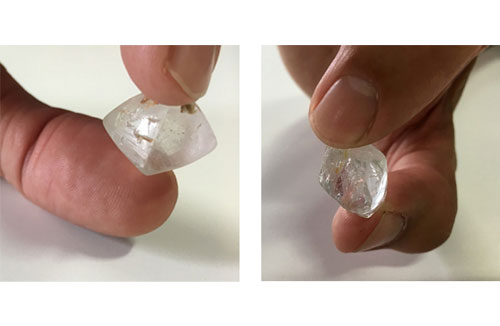 HRD Antwerp has reported that two large, near-colourless rough stones weighing 50.08 and 38.18 ct that were believed to be diamonds and were submitted to its research department to determine their quality, were actually topaz. The lab said that topaz is one of the colourless diamond simulants that can be found on the market, and can be easily misidentified.

The announcement by HRD notes that since topaz has a similar density to diamond, the stones could not be identified as diamond imitations through hydrostatic measurement or the use of a 3D-scanner (volume calculation and weight) at the trader’s office.

However, on microscopic investigation internal growth planes were revealed reflecting orthorhombic growth in the two submitted gemstones; characteristic of topaz, as diamonds have crystallization patterns in the regular system, the report said.

A further Raman analysis, commonly used in chemistry to provide a structural fingerprint by which molecules can be identified, clearly indicated that the heavily included stones were topaz and not diamond, HRD said.

The lab also did a detailed study of the rather large inclusions which also showed the presence of typical bi-phase inclusions of topaz that are as a rule not found in diamonds.

HRD concluded, “After these different investigations, and given the octahedral shapes of the submitted stones, it seems obvious that the topaz crystals were manipulated and polished to show the typical growth lines and growth structures of diamonds to fool any potential buyer.”

It warned that worldwide “more and more topaz are cut” in an attempt “to fool rough diamond buyers”.

Expressing Concern About the “Pace of Reform” in KP, WDC Urges...