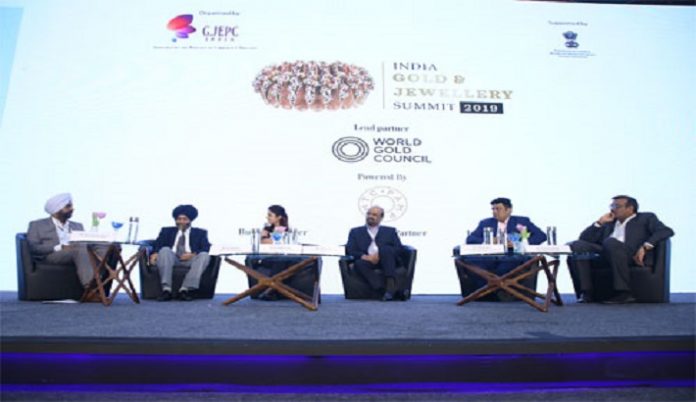 Discussions on Day One of the 3rd India Gold Jewellery Summit which opened in Delhi on November 22 focused on the different features of the gold market, particularly in India and the range of policy measures that would be needed to transform it into a modern engine for growth both in the export and domestic sectors. With the formal inaugural by the Hon’ble Minister of Commerce & Industry and Railways, Government of India, Shri Piyush Goyal scheduled to take place in the late evening, the Summit commenced with a simple opening session.

The rest of the day was divided into two slots each comprising a short presentation and a panel discussion on “Demand& Supply Scenario” and “India Gold Policy” respectively. Setting the context for the deliberations over the two day event, GJEPC Chairman Pramod Kumar Agrawal said that the gold jewellery sector would play an important role in helping the Council achieve its vision of taking exports to US$ 75 billion and creating 2 million additional jobs in the sector by 2025. He added that the discussions would provide valuable insights on the way forward. Ms Rupa Dutta, Economic Adviser, Department of Commerce emphasised that the government is aware of the potential of the sector and had been supporting it with trade-friendly policies.

“Gold is a 100 percent import based business and we can only enhance business by making better designs, focus more on exports of handmade jewellery and move up in the global value chain,” she said. While listing some of the recent measures taken, she added, “We know a lot more needs to be done and we are committed to doing so, with a special focus on pushing the growth of smaller companies in the MSME sector from different parts of India.” Setting the context for the subsequent discussion on Demand Supply Scenario for gold, Alistair Hewitt, Director, Market Intelligence, WGC gave a brief overview of the findings of a recent global study done by his organisation entitled, “Retail Gold Insights: A World of Opportunity”.

He stated that consumers – both retail investors and those in the fashion / luxury segment – have a strong affinity for gold. However, the study also revealed that there were two key issues on which consumers need to be engaged for the market to grow: trust and awareness. A panel comprising J S Pasricha, Dy. DG, Hall Marking, BIS; Surendra Pal Singh, JS, Dept. of Economic Affairs; James Jose, Cochin Refinery; Surendra Mehta, National Secretary, IBJA and Chirag Sheth, Senior Research Consultant: South Asia and South East Asia, Metals Focus and moderated by Manisha Gupta, Editor Commodities and Currencies,CNBC TV 18, broadly concurred with these observations. They agreed that to gain consumer confidence hallmarking should be made mandatory, with increased digitisation of the process and procedures.

They also called for development of a number of financial products around gold, establishment of bullion spot exchange, and variety of product innovations across financial and other categories to make the market attractive for the millennials. The second session was devoted to a discussion on the contours of the proposed Gold Policy. It began with some pertinent context setting remarks on the importance of having a full fledged policy to steer the transformation of the Indian gold market by PR Somasundaram, MD, India, WGC. He also joined the subsequent panel discussion that saw a sharing of views by Ms Rupa Dutta, K V Tiirumala, Dy DGFT and Prakash Pincha, representing the trade, moderated by Rajesh Khosla, Chairman-Emeritus, MMTC PAMP.

The moderator suggested that the gold policy should be closely integrated with the other changes in the country’s economy and during the lively discussion that followed some key observations that emerged were: there should be a plan in place to bring the estimated 25,000 tonnes of idle gold with consumers, trusts and other bodies into the market, including making it exempt from any taxation, and that handmade jewellery had the potential to increase exports. The panellists also agreed that there was a need for creating evidence-based policy recommendations and cogent documents outlining proposed measures which could be put before the government in the form of concrete suggestions. Pic caption: The panel discussion on Demand-Supply in progress 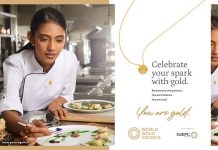