Trade show International Jewellery London has announced that it is officially open for applications for its ninth annual KickStart mentoring programme ahead of this year’s event.

The KickStart initiative is supported by the National Association of Jewellers and has helped 80 young designers since its launch in 2009.

While the initiative had ten spots up for grabs last year, this year IJL has revealed that emerging up-and-coming designers in the UK will be competing for one of six positions.

The six selected designers will have access to career-boosting benefits, including a mentoring package, workshop days, ongoing pricing, branding and marketing support, introductions to industry figures and the opportunity to win a free stand at IJL 2019 in the special Industry’s Choice award.

As well as industry benefits and support, each UK-based winner will receive a bursary funded directly by the Benevolent Society to assist with London transport and accommodation costs.

IJL event manager, Sarah Kitley-Spencer, explained: “KickStart nurtures ambition, determination and talent, giving up-and-coming designers the chance to get their collections seen. Now in its ninth year, KickStart is entirely unique, with an unrivalled package of support, as well as the opportunity exhibit at IJL 2018.”

NAJ jewellery industry promotions ambassador, Lindsey Straughton, added: “Those chosen for KickStart are immediately highlighted as the ‘stars of tomorrow’, which creates an important media and brand awareness opportunity.”

2017 KickStart winner, Farrah Al-Dujaili from Oddical, concluded: “KickStart gave me the perfect platform to launch new additions to my collection and get in touch with stockists that I wanted to work with; it gave me more confidence sending those initial emails. It helped me secure multiple stockists and created great PR for Oddical.” 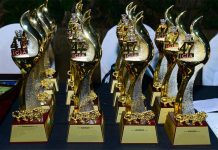 Baselworld managing director exits the show after 15 years at the...