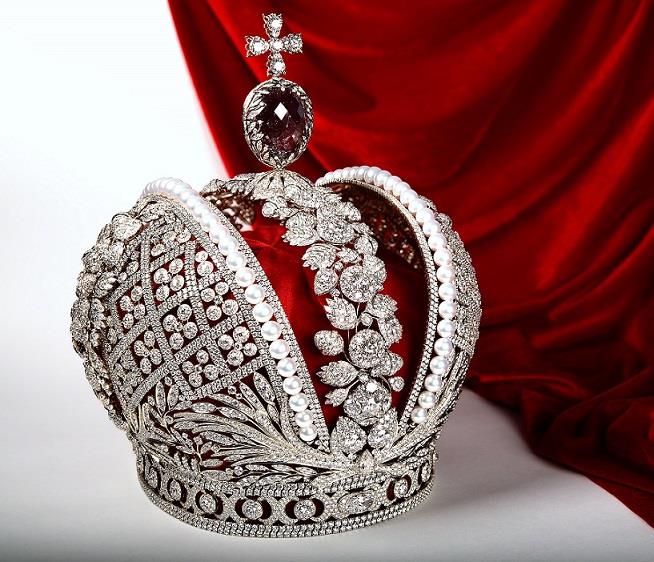 A replica of the Great Imperial Crown of the Russian Empire, which was used in the coronations of all Russian monarchs since Catherine the Great, will be exhibited from February 13 – 14, 2017 at the sixth International Diamond Week in Israel.

The replica of the Crown was created by Kristall – Smolensk, Russia’s leading diamond manufacturer in honor of its 250th anniversary, and is being brought to Israel with the cooperation of Alrosa. It contains 11,352 polished diamonds, with a total weight of 1,180 carats. All of the polished diamonds are made from Alrosa rough. Its value has been estimated at $20 million.

During IDWI Alrosa will also display especially large and unusual polished and rough diamonds, some of which will be included in its tender during the week of rough and polished diamonds weighing between 10 and 199 carats. Alrosa President Andrey Zharkov will be a guest of honor of IDWI, and will open the new International Tender Center in the Israel Diamond Exchange.

The Crown replica has been displayed in various venues throughout Russia, and has been the central attraction of an exhibit dedicated to Catherine the Great at the Hermitage Museum in Amsterdam from June 2016 – January 2017. It has been viewed by 400,000 people since its creation in 2012.

This year’s International Diamond Week will feature several tenders of rough and polished diamonds by major producers and independent suppliers. This is in addition to the large variety of goods on offer by hundreds of Israeli and international exhibitors. IDWI 2017 will offer a rich social program including free sightseeing to Jerusalem and the Dead Sea. Buyers are also eligible for free accommodations for three nights in nearby hotels.

ALROSA and ZCDC established a joint venture in the Republic of...