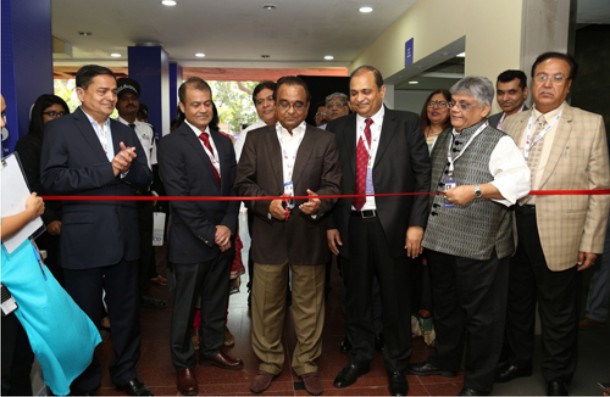 Veteran diamantaire Arunkumar Mehta, Chairman of Rosy Blue (India) and B.Arunkumar Group of Companies today inaugurated the 11th edition of Signature IIJS and 5th India Gem & Jewellery Machinery Expo (IGJME) while emphasising that only sustained generic promotions could bring back the shine to the jewellery industry.

Mehta, who was the Chief Guest at the inauguration, welcomed the formation of the Diamond Producers Association (DPA) and the promotional campaigns undertaken by it over the last couple of years. He said that such promotions should be spread to all markets across the world which have a potential to grow, recalling how the rise of diamond consumption in Japan on the back of promotional drives had fuelled further growth for the diamond industry some decades ago. “We have to bring back the lost glory of our industry,” he concluded.

Earlier, welcoming the guests to the show, Pramod Agarwal, Chairman GJEPC said that the new Committee had recently met the Hon’ble Union Minister of Commerce & Industry and would soon be presenting a plan to the government for the promotion of Indian jewellery under Brand India in the global markets. This would include a perspective for boosting the exports of handmade products as well as lower cost fashion jewellery, Agarwal said, as these segments had the potential to generate employment and provide higher levels of value addition.

Outlining some of the areas where Council was working closely with the government for upgradation of smaller units currently in the unorganised sector, Agarwal highlighted the setting up of Common Facility Centres at various places across the country to boost access to technology and enable the smaller artisans to upgrade their skills and product quality; setting up of Help Desks idance in Council offices to provide advice to members and direct guidance in boosting exports; strengthening the infrastructure of Indian gemmological labs so that their certificates gain international acceptance, and enhancing the network of design insitutes across the country.

In his concluding address, Shailesh Sangani, Convener–National Exhibitions, GJEPC, said that the show is well timed to take advantage of the traction the industry has gained in recent months. He said it could also help the industry players prepare for the expected growth in demand for jewellery that is likely as a result of steps announced in the recent budget to boost rural incomes and enhance employment.

The mood was reflected in a rise in the number of pre-registered visitors – 14,500 at the start of the show as against 11,000 last year, Sangani said, adding that the organisers were expecting the number to rise to about 16,000 by the end of the shows. He said that the show this year was much bigger with the addition of an extra Hall, and 7,000 sq m of floor space which accomodated 200 additional booths. This has helped Council provide an opportunity to some of the exhibitors on the waiting list, and further develop the IGJME also. “In time we want to build IGJME into the premier and largest machinery expo in Asia for the industry,” Sangani concluded.

There was a regular inflow of visitors into the Halls during the first day, and as always, a greater rush in the gold jewellery section. While exhibitors opined it was too early to comment on the show, the mood across the Halls was fairly buoyant, with expectations of a larger inflow over the next two days. Gems Worth $177m Seized from Fugitive Modi and Uncle