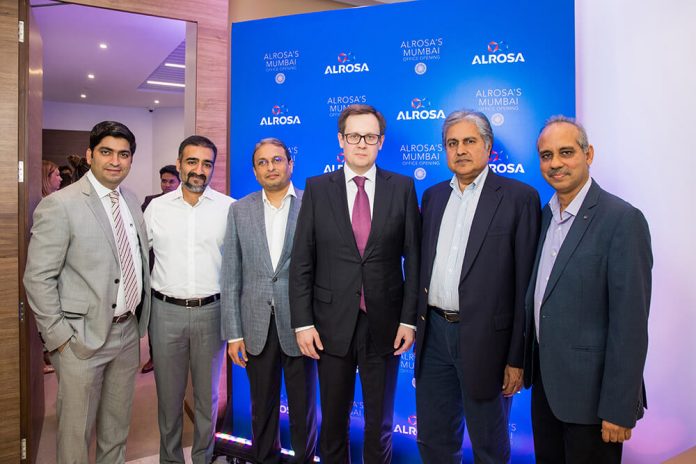 In a warm and intimate ceremony, ALROSA inaugurated its India Representative Office this morning. The newly acquired office is located in Tower AE in the Bharat Diamond Bourse (BDB) Complex in Mumbai’s Bandra Kurla Complex (BKC).

Evgeny Agureev, Member of the Executive Committee of ALROSA; and Director of the Company’s sales arm, the United Selling Organisation who had specially travelled to Mumbai, presided over the ceremonies. He was joined by Jim Vimadalal, Director, Indian Representative Office, ALROSA.

Speaking to the media after the ribbon cutting, Agureev said, “The setting up of this representative office in Mumbai is the direct result of the MoU signed between the GJEPC and ALROSA in 2017, and which is backed at the highest level with the further talks between our President and the Prime Minister of India.”

He added: “This is not a trade office. But we are interested in understanding the Indian market, supporting the efforts of the industry here to face any challenges that we as the global diamond industry face, and to be able to have our finger on the pulse of the industry and market here. It is a new chapter in our relations and we are here for the long haul.”

Vimadalal expressed his satisfaction at the launch of the India Representative Office. “I look forward to the support of the GJEPC and BDB as we go forward. We would also like to work together with the Indian industry to tackle issues like the threat of undisclosed synthetics. We will soon be introducing our gem testing machine Inspector here.”

Russell Mehta who was the former Vice Chairman of GJEPC said: “Today our Chairman and Vice Chairman were unable to attend as both are travelling. But on the behalf of GJEPC, I welcome ALROSA to India. I was also present when our PM and the Russian President had their discussion and I am extremely happy that journey has culminated successfully.”

He went on to say: “Now we look forward to more direct discussions and exchanges and we hope that ALROSA will increase its sales to India.”

“This office will be like a bridge between the largest producer of rough diamonds which you are, and the largest manufacturing centre, that is India,” Anoop Mehta said congratulating ALROSA on its new office. “We have a very large manufacturing base here and we are always looking for a regular supply of rough diamonds. We look forward to your support on all matters before the trade.”

In the media interaction which followed, Agureev and Vimadalal fielded several questions from the floor.

In reply to a question on marketing, Agureev said ALROSA has been developing a marketing programme since the end of last year/beginning of this year, which is expected to be launched soon. He said that it would be unveiled both internationally as well as in India. The marketing campaigns will cover several aspects including fancy cuts, brand of ALROSA; it will be linked to transparency and will also incorporate the history of diamonds.

Diamcor Announces Results of Tender And Achieves USD $195.66 Average for...