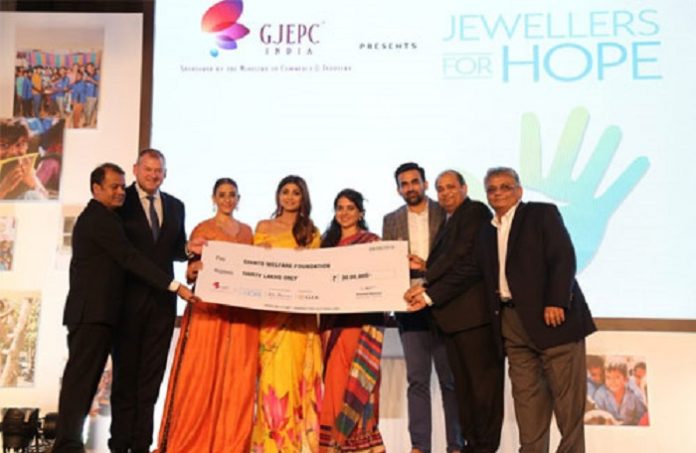 In the evening of the opening day of the IIJS 2018, The Gem & Jewellery Export Promotion Council (GJEPC) organised the Jewellers for Hope gala charity dinner, as has become the practice over the last few years.

The Jewellers for Hope (JFH) is the CSR arm of the GJEPC, and each year since its inception in 2014, the organisation has donated a total of Rs. 1 crore to one or more (divided between them) NGO/charity doing sterling work in supporting the underprivileged. Several of these organisations work to alleviate the suffering of, or impart dignity to, affected women or children.

This year, the Jewellers for Hope dinner was organised by the GJEPC in association with the De Beers Group of Companies and was powered by GIA. The Chief Guest at the function was Paul Rowley, Executive Vice President, Global Sightholder Sales, De Beers Group. The Guest of Honour was the renowned Nobel Peace Prize Laureate Kailash Satyarthi who has devoted his energies to the cause of children’s welfare for the last many decades.

The Chairman of the GJEPC Pramod Agrawal set the tone for the evening when he spoke about the immense contribution that the gems and jewellery industry has been making over the years to society and social causes. He gave various examples including citing the work of the Gems & Jewellery National Relief Foundation(GJNRF) – an organisation set up collectively by the industry – which has helped victims of various natural calamities like floods and earthquakes; terrorist attacks and war widows and their children.

He went on to explain that apart from the CSR and philanthropic work carried out by the individual companies and the GJNRF, the GJEPC itself had, a few years back, launched two initiatives in the CSR area.“We set up the Jewellers for Hope charity where we collect money to donate to organisations doing meaningful work for social welfare,” Agrawal stated. “We also introduced the Swasthya Ratna scheme under which companies can enrol to take health insurance policies for their workers. The Council also contributes to a portion of the policy premiums.”

The Chairman added: “We are a US$ 41 billion industry and employ 5 million people. By 2022, we aim to raise that figure to 7 million by creating an additional two million jobs. Towards realising this we are strengthening our training institutes, setting up Common Facility Centres (CFCs), and we will soon set up the first Jewellery Park in Mumbai.”

As part of the normal course of business, the entrepreneurs of this industry have set up modern facilities providing an excellent working environment for their workforce, he noted.

“This is an industry which believes in giving back to society,” Agrawal concluded emphatically.

Rowley applauded the philanthropic work being done by the Indian industry, and particularly the hope being spread by Jewellers for Hope. He spoke about the good diamonds do in communities where the diamond industry is based the world over. “We at De Beers are fortunate to be amongst the leaders of the diamond industry,” Rowley said. “But with that comes privilege as well as responsibility.” The responsibility to ensure the welfare of the communities and the less privileged wherever the industry is based, he emphasised.

GJEPC Vice Chairman Colin Shah thanked De Beers and the GIA for coming forward to support the event. He emphasised that the gems and jewellery industry had also contributed to the sum to be donated. “Today, those present represent a cross section of the industry,” noted Shah. “And I must say that all the companies whom we approached came forward readily and immediately to make donations.”

Shah announced that the GJEPC had launched a campaign outlining the work being done by the gems and jewellery industry, in the are of social welfare, to build a “positive image” of the industry.

“We want to be super positive, because we really do make a difference,” emphasised Shah. “And we do that because we have hearts of gold.”

Politician, social worker and fashion designer Shaina NC, whose father, the late Nana Chudasama set up the Giants Welfare Foundation, spoke about the work being done by the organisation in a variety of fields. She was accompanied by cricketer Zaheer Khan; Bollywood actress Shilpa Shetty; and Bollywood actress and cancer survivor Manisha Koirala.

Dr. D.R. Mehta of BMVSS outlined the work of his organisation in the field of prosthetics. The Jaipur Foot, developed by the BMVSS, has restored dignity to many and has also given them the ability to participate in many activities which would otherwise have been denied to them.

But the man of the moment was clearly Nobel Laureate Satyarthi who twice received a standing ovation. Satyarthi traced his journey over the decades when he gave up a career in engineering to work for children’s rights and their welfare. He peppered his talk with several examples through these years, which not only provided an insight into his work but were truly inspirational.

Milan Chokshi, Convener of the GJEPC’s Promotions, Marketing & Business Development (PM&BD) sub-committee brought down the curtain on an evening which had cast a light on one of the gems and jewellery industry’s brightest facets – its ability to spread hope and bring a smile on the faces of so many people. Chokshi thanked all the sponsors and contributors; and the special guests who had helped to make the evening a resounding success.

Kennady’s Bulk Sampling Results Return Average Price of US$ 52 Per...