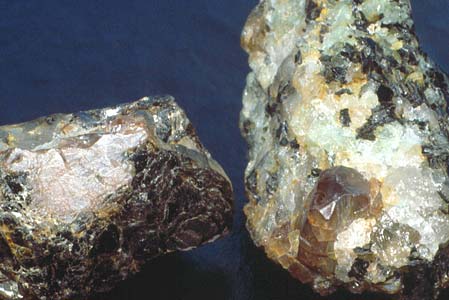 This rare gemstone is named after the Russian tsar Alexander II (1818-1881), the very first crystals having been discovered in April 1834 in the emerald mines near the Tokovaya River in the Urals. The discovery was made on the day the future tsar came of age. Although alexandrite is a relatively young gemstone, it certainly has a noble history. Since it shows both red and green, the principal colours of old Imperial Russia, it inevitably became the national stone of tsarist Russia.

Beautiful alexandrite in top quality, however, is very rare indeed and hardly ever used in modern jewellery. In antique Russian jewellery you may come across it with a little luck, since Russian master jewellers loved this stone. Tiffany’s master gemmologist George Frederick Kunz (1856-1932) was also fascinated by alexandrite, and the jeweller’s firm produced some beautiful series of rings and platinum ensembles at the end of the 19th and beginning of the 20th century. Smaller alexandrites were occasionally also used in Victorian jewellery from England.

The magic of changing colours

The most sensational feature about this stone, however, is its surprising ability to change its colour. Green or bluish-green in daylight, alexandrite turns a soft shade of red, purplish-red or raspberry red in incandescent light. This unique optical characteristic makes it one of the most valuable gemstones of all, especially in fine qualities.

Alexandrite is very scarce: this is due to its chemical composition. It is basically a chrysoberyl, a mineral consisting of colourless or yellow transparent chrysoberyl, chrysoberyl cat’s eye and colour-changing alexandrite (also in cat’s eye varieties). It differs from other chrysoberyls in that it not only contains iron and titanium, but also chromium as a major impurity. And it is this very element which accounts for the spectacular colour change. Rarely, vanadium may also play a part. According to CIBJO nomenclature, only chrysoberyls displaying a distinct change of colour may be termed alexandrite.

Like many other gemstones, alexandrite emerged millions of years ago in a metamorphic environment. But unlike many others, its formation required specific geological conditions. The chemical elements beryllium (a major constituent in chrysoberyl) and chromium (the colouring agent in alexandrite) have contrasting chemical characteristics and do not as a rule occur together, usually being found in contrasting rock types. Not only has Nature brought these contrasting rock types into contact with each other, but a lack of the chemical element silica (the second most common element in the Earth’s crust) is also required to prevent the growth of emerald. This geological scenario has occurred only rarely in the Earth’s history and, as a result, alexandrite crystals are very scarce indeed.

Nowadays not only from Russia

Russia has remained the primary source of alexandrite since gems from the mines of the Urals became available on the market. When the Russian deposits were thought to have been exhausted, interest in the unique colour miracle decreased – especially since alexandrites from other mines hardly ever displayed the coveted colour change. But the situation changed dramatically in 1987, when alexandrites were discovered in a place called Hematita in Minas Gerais, Brazil. The Brazilian alexandrites showed both a distinctive colour change and good clarity and colour. Thus the somewhat dulled image of the miraculous stone received another boost. The colour of the Brazilian stones is admittedly not as strong a green as that of Russian alexandrite, but the colour change is clearly discernible. Today Hematita is one of the most important deposits of alexandrite in economic terms. Occasionally alexandrite with chatoyancy is discovered there, an effect which has not yet been observed in Russian alexandrite. Alexandrites are also obtained from sources in Sri Lanka, but the hue of these stones compares less than favourably with that of the Uralian alexandrites. They appear green in daylight and a brownish red in artificial light. The Tunduru area in southern Tanzania has also produced some outstanding specimens since the mid-1990s. Alexandrites are also found in India, Burma, Madagascar and Zimbabwe. Although this stone is still considered a rarity, specialised gemstone dealers do stock it, especially since improved trade relationships between Russia and the rest of the world have ensured a better supply of Russian alexandrites to the market.

A gemstone for experts and gemstone lovers

With its good hardness of 8.5, alexandrite is an uncomplicated stone to wear. The more distinct the change of colour, the more valuable the stone. A fine alexandrite should show a vivid bluish-green in daylight and a purplish-red in artificial light, without any trace of undesirable brown or grey. If the origin of the stone is known beyond dispute to be Russia, we are talking about a real rarity of enormous value. Finely faceted alexandrites above one carat are thus among the most expensive gemstones in the world, rarer than fine ruby, sapphire or emerald.

Alexandrite is a stone for experts, enthusiasts and connoisseurs, a true understatement stone. Its uniqueness and high value are not evident at first sight. The mysterious colour change will only occur on exposure to different light sources. But if you really get involved in alexandrite, you will be utterly fascinated by this gem. Maybe you will also feel some of the mysterious magic and lore ascribed to it. It is considered a stone of very good omen. In critical situations it is supposed to strengthen the wearer’s intuition, and thus help him or her find new ways forward in situations where logic will not provide an answer. Alexandrite is also reputed to aid creativity and inspire the imagination.