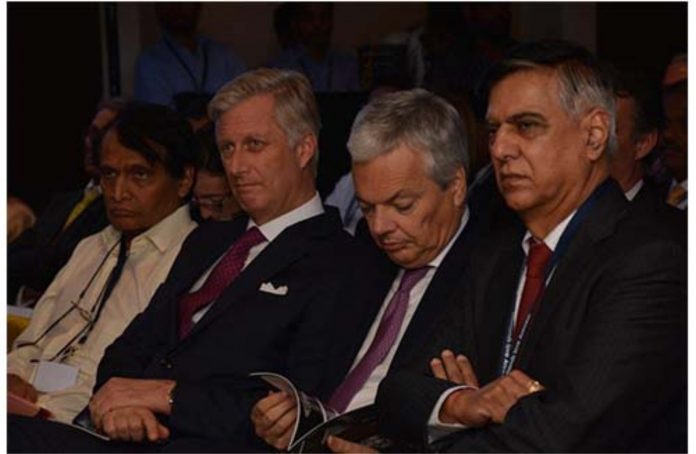 H.H. King Philippe of Belgium who was in India on an official visit, made time in his busy schedule to grace a Round Table on “Best Practices from the Diamond Business to Foster Socio-Economic Development” organised in Mumbai jointly by The Gem & Jewellery Export Promotion Council (GJEPC) and the Antwerp World Diamond Centre (AWDC) on November 9, 2017. Also present at the event were Belgian Deputy Prime Minister and Minister of Foreign Affairs and European Affairs, HE Didier Reynders; and the Hon’ble Shri Suresh Prabhu, Minister of Commerce & Industry, Government of India.

The meeting opened with an address by Stephane Fischler, President of the AWDC. He stressed that while the ideals of corporate social responsibility and responsible sourcing were embedded in the diamond industry, the image of the industry had not changed sufficiently to reflect this. “Many people remain sceptical, people feel we do not walk the talk,” he said. “We can’t allow this misconception to remain in the minds of people.”

Fischler went on to enumerate the measures taken by the industry as a whole (including the setting up of the KPCS and the WDC); and the Antwerp diamond industry in particular which made it evident that there was transparency of sourcing and strict tracking to ensure that no conflict diamonds entered the mainstream business. He referred to the work done by Antwerp’s Diamond Office, a public-private partnership between the Government of Belgium and the Belgian diamond industry and the painstaking manner in which it ensured that each diamond that entered or left the country was “clean”. He also said that Belgium’s diamond industry had drawn up a Sustainability Master Plan 2020; and AWDC had joined up with RJC in 2014 as a trade member and the two organisations had jointly produced a sustainability report.

GJEPC Chairman Praveenshankar Pandya emphasised that Indian companies within the diamond industry had been involved in charitable and social development work long before CSR requirements were made compulsory by the Government for corporate entities. He spoke of the large size of the diamond manufacturing industry in the country and said that today some of the best factories in the diamond industry worldwide were to be seen in Surat. “There has been a huge change in the work environment,” Pandya said. “The Government has mandated that companies expend 2% of profits on CSR activities; many companies in the diamond industry are dedicating about 10% for welfare work and social development.” He also emphasised that the diamond industry had never shied away from challenges, but rather tackled them with an approach of solving the issue and going ahead. In this respect he recounted the time when allegations of child labour being used by the Indian diamond industry had surfaced several years back. He said the GJEPC had asked A. F. Fergusson a leading independent consultancy to conduct a survey to ascertain the extent of child labour – which was found to be negligible and mainly within the small-scale cottage industry. The GJEPC had also organised several awareness raising seminars and meetings all over the small town manufacturing centres in Gujarat to ensure that this practice was eradicated.

HE Didier Reynders spoke of the importance of protecting natural resources and the work done by the Belgian government and its diamond industry in various African countries. He stressed the role of KPCS, saying however that some reforms to the organisation were necessary. In this context he said he looked forward to the next two years when first, in 2018, EU would take the KPCS Chair, with India as Vice Chair; and then India would take the Chair in 2019. “These two years are going to be crucial for the reforms, but we will do it together,” he concluded.

Hon’ble Shri Suresh Prabhu spoke of the long and strong traditional ties between Belgium and India, particularly of the diamond industries of the two countries. He also stressed India’s strong relationship with the EU as a whole, and the efforts currently being made for India and the EU to enter a Free Trade Agreement. However, he stressed, Belgium and India must renew and refresh their relationship in the modern context, to make the interaction more flourishing, more valuable. “We should work towards doubling the trade between the two countries,” he exhorted.

Once the official delegation – the King’s entourage – had left, the Round Table Discussion on Sustainability began. Peter Wollaert a UNITAR Fellow and the Managing Director of CIFAL, Flanders gave a detailed presentation on “The Sustainable Development Goals: A Global Vision for Policy and Business Action.”

(The CIFAL Global Network is part of the United Nations Institute for Training and Research (UNITAR). The Network comprises 15 International Training Centres (CIFALs) and aims to serve as a platform for capacity-building of government authorities and civil society leaders on topics related to sustainable development, as well as on global mandates and goals of the United Nations.)