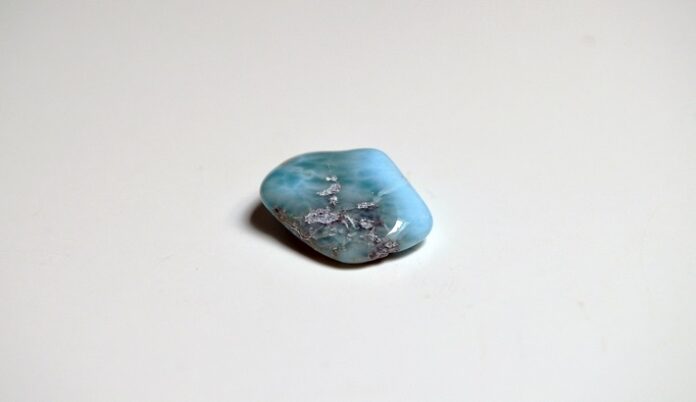 Blue Stone, Dolphin Stone, and even Atlantis Stone. Over the years, Larimar has been called in many different ways, expanding the mysterious and fascinating aura around it. But what is the true origin of this gemstone? And does it have healing properties? Let’s find out.

The history of Larimar

Originally discovered in 1916, the name “Larimar” was given to this gemstone only in 1974, when it was rediscovered by Miguel Mendez and Norman Rilling, a Peace Corps Volunteer from the USA, in the Dominican Republic. In fact, the world “Larimar” is the combination of Mendez’s daughter’s name (Larissa) and “Mar” (sea).

But as we already mentioned, Larimar has been given a lot of names in the past. “Dolphin Stone”, for instance, is one of the most popular ones. According to some, Larimar can facilitate communication with the sea creature and particularly dolphins, that in popular beliefs have often been connected to Atlantis.

Not surprisingly, another popular name of Larimar is “Atlantis Stone”, and its origin is perhaps the most fascinating one. During his life, the American clairvoyant Edgar Cayce predicted that someone would discover a blue-colored stone on a Caribbean island that was part of Atlantis. And as we already know, Cayce’s prediction turned out to be accurate.

The properties of Larimar

Larimar possesses many, beneficial features. From a physical point of view, Larimar is said to be very effective in treating cartilage and throat and dissolving blockages of multiple body parts. The Dolphin Stone is also used to alleviate inflammations and infections, relieve high body pressure, and soften skin complaints such as psoriasis, eczema, and hives.

Larimar is highly beneficial for the mind as well. In terms of behavior, this stone can enhance a positive attitude toward problematic situations. Being more self-conscious and independent are among the most important benefits of Larimar, which can also limit self-destructive behavior.

Most importantly, this gemstone brings a sensation of calm and inner peace. This is why it is highly recommended for meditation and for anyone who wishes to come closer with his or her inner-self. It can align the body and the mind, leading someone to a state of full consciousness that can be crucial for many activities. It helps relax and concentrate, improving a person’s sleep.

The last, beneficial feature of Larimar is its ability to disconnect from internal and external negative stimuli. Feelings of uncertainty, perhaps caused by other people’s judgments and expectations, can be kept under control more easily with Larimar.