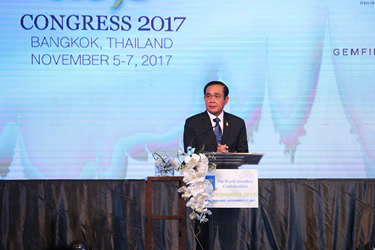 “It is an honour for Thailand to host this meeting which is beneficial to the domestic and international gems and jewellery industry as the congress offers members an opportunity to share information and experiences that may be utilized to efficiently develop the industry which is a key factor to the economic development of the nation. The gems and jewellery industry is an important part of Thailand’s economy, creating jobs and income for both large and small companies that employ over 1 million people in total. Related jobs in this industry range from stone selectors, craftsmen, cutting professionals to general labour while the gems and jewellery industry also creates value for other related industries,” said General Prayut Chan-o-cha.

“Thailand is determined to develop products to elevate the country’s gems and jewellery industry, with the goal to establish itself as the world’s gems and jewellery trading hub by 2021. In the past few years, the Thai government has issued measures to promote this industry, from waiving the import duty for gems and jewellery, improving the quality and standards of jewelry, promoting businesses to seek partnerships for resources, educating the workforce, issuing marketing schemes to connect the industry to the tourism sector. We are confident that these measures will contribute to Thailand’s goal to become a trading hub in this industry,” the Prime Minister added.

“This year, Thailand received the honour to host the annual World Jewellery Confederation meeting or CIBJO Congress 2017 from November 5 to 7, 2017 at Shangri-La Hotel Bangkok which is an important gathering of professionals in the gems and jewellery industry worldwide where over 300

businesspeople in the industry from 42 countries joined in the meetings,” said Mrs Apiradi Tantraporn, Minister of Commerce.

“Apart from discussions on various measures, the Congress presented an opportunity for participants to build networks and strengthen relationships. Thai traders also took this opportunity to seek potential business partners with international gems and jewellery companies and organizations such as leading diamond traders De beers, the CEO of leading gemstone traders Gemfields, representatives from world renown organizer of jewellery and watch fair Vicenzaoro as well as an international environmental and social organization,” the Minister of Commerce added.

In 2016, Thailand ranked as the country with the tenth-highest value of gems and jewellery exports (including gold), worth US$14.246 billion in 2016 (500 billion Baht) or 3.49 percent of the country’s GDP. In the first 9 months of 2017 (January to September), export from this industry brought in over US$10.6 billion (364 billion Baht) and is one of the top-three exports of the country.