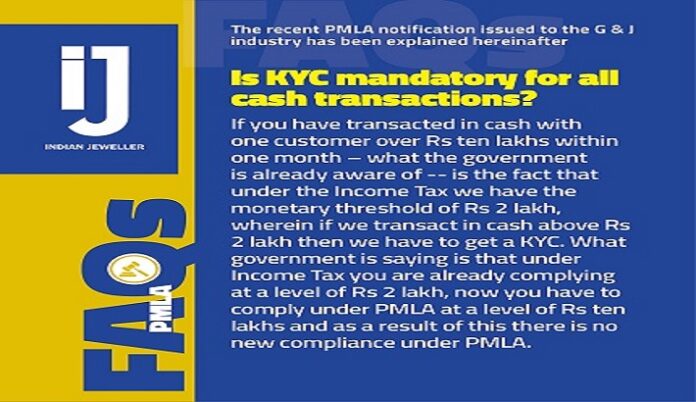 There are some clarifications which have come from the government and discuss this matter in detail especially in connection with what the recent notification means for G & J industry — Rohan Shah joined Colin Shah, Chairman GJEPC, at the IIJS Virtual 2.0 on January 9.

Rohan Shah has worked with the Council and several trade bodies in various capacities. He is an expert on this topic. He has been appointed by the Ministry of Commerce and Industry as India’s representative and Governor on the Board of Economic Research Institute for ASEAN and East Asia. He was awarded the Indian Tax Lawyer Of The Year at The Legal Era Awards of 2019 and he has been a great supporter to GJEPC over the years on crucial Law-related issues.

As per the clarifications which came on January 8, many issues have been addressed. Earlier, people thought that the entire industry has been made a reporting entity, so whether you are dealing in precious metals or precious stones, or jewellery, etc. you now were required to maintain a KYC for every transaction over Rs 50,000 and that you had to file monthly returns and that therefore for every transaction you had to do a KYC and also report suspicious transactions to authorities. As per clarifications which came on January 8: Firstly, there is no new compliance that you need to fulfill other than the ones you were doing before, under PMLA. It is only in case of cash transactions over Rs Ten Lakhs that you have to do this compliance in relation to that transaction.

1. If you have transacted in cash with one customer over Rs ten lakhs within one month – what the government is already aware of — is the fact that under the Income Tax we have the monetary threshold of Rs 2 lakh, wherein if we transact in cash above Rs 2 lakh then we have to get a KYC. What government is saying is that under Income Tax you are already complying at a level of Rs 2 lakh, now you have to comply under PMLA at a level of Rs ten lakhs and as a result of this there is no new compliance under PMLA.

2. The fact whether connected transactions which may total upto Rs ten lakh in cash need to be examined closely – this hasn’t been clarified as yet.

3. Who is a customer – is he the taxpayer – who becomes an associate of Income Tax office or is it only the person who buys from you, as sometimes your buyer may not be an income tax payer at all.

All of these matters are as yet open ended. CBIC also realizes that some more clarifications are needed. CBIC will look into compliance. Non compliance may be acted upon by ED. If you have a cash transaction over Rs ten lakh you need to comply with KYC. Your report will include nature of transaction by the 15th of next month and in case of suspicious transactions you need to file KYC within seven working days. Buyer’s Aadhar card and PAN or any equivalent document of proof identity of your buyer needs to be submitted.