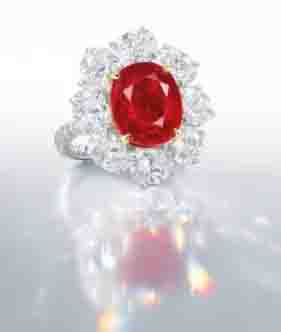 Christie’s will auction the Ratnaraj Ruby at its Nov. 29 Magnificent Jewels sale in Hong Kong.

“Burmese rubies in recent years have been generating fervent bidding in auction rooms around the world, with the most perfectly and highly saturated rubies referred to as pigeon’s-blood,” according to a statement from Christie’s. “Only those rubies of exceptional saturation and natural red fluorescence can be deemed as pigeon’s-blood, and it is particularly rare of a ruby of this quality to appear in over 5 carats.”

The evolution of diamond jewellery