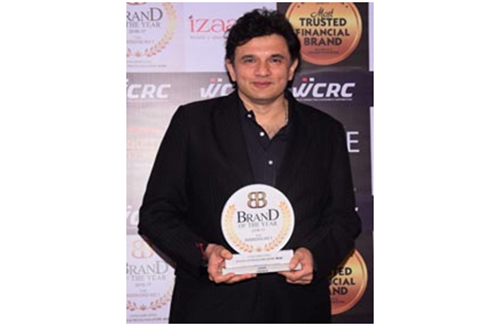 WHP Jewellers’ Izaara jewellery – launched in October 2016 – was declared as one of “The Emerging Brands of India”, by World Consulting & Research Corporation (WCRC) which held a glittering award ceremony at which a plethora of awards were distributed. Apart from the Emerging Brand of the Year, awards were also given in categories like: ‘The Pride of India Awards’, ‘India’s Most Trusted Financial Brands 2016′ and ‘Brands Illustrated Marketing Masterminds 2016’.

“WCRC’s ‘Brand of the Year – Emerging No. 1’ is a research based listing of the top 50 emerging brands in India,” the Corporation said in a press note. “ibrands360 conducted a consumer perception survey on ‘The Emerging Brands of India’. The survey was initiated by generating a list of 1000 brands from 15 categories, comprising more than 50 sub-categories which were shortlisted to 300 after a rigorous elimination process and further categorized as Automotive, Finance, Consumer Durables, Education, Energy & Power, FMCG, Food & Beverage, Healthcare, Hospitality, Infrastructure, Media & Entertainment, Retail, Services, IT & Telecom and Lifestyle. A nation-wide in-depth consumer survey was done across major cites of India, followed by jury scoring to decide the top 50 brands for the Emerging Brands of the Year listing.”

Commenting on the occasion, Abhimanyu Ghosh, Editor-In-Chief, WCRC said, “The list of awardees was created after months and months of research, study and analysis. These honorees were picked after considering many important factors such as results, ethics and the work culture they’ve created. Every person & brand who walks in this room tonight, is a true achiever.”

Aditya Pethe, Director – Izaara, said: “Being recognised by a credible body like WCRC is a great honour as well as an acknowledgement of the fact that Izaara as a brand is on the right track. The aim to launch this brand was to cater to the needs of a unique consumer base, which believes in variety as a spice of life. The brand has received an overwhelming response from the consumers and we have plans to launch around 50 stores by the end of 2017.”