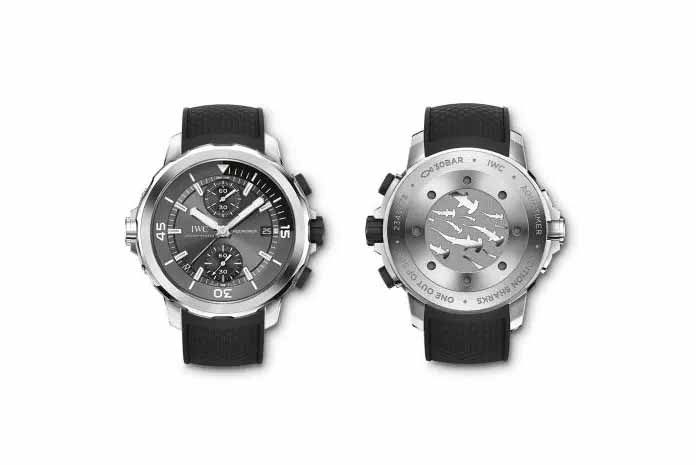 The Swiss watchmaker has big things in store for 2017

I’ve long promised my boyfriend, Jim, that when he’s old enough and I’m rich enough, I’m going to buy him a watch from IWC Schaffhausen. The Swiss brand makes elegant, high-quality timepieces with a sporty, clean aesthetic. Manly but not ostentatious, and high-end yet accessible, they look just as good in the boardroom as at the beach.

Over the course of my 16 years writing about the watch business, I’ve learned much about the brand—in part because IWC places a premium on marketing and events. (That background knowledge came in especially handy last year, when I sat down with CEO Georges Kern for a New York Times profile that ran in January). Here are five facts about IWC that may surprise you.

1. The watchmaker knows how to throw a good party.

Last Thursday, IWC hosted a cocktail party at its year-old boutique on Rodeo Drive in Beverly Hills to celebrate the debut of the IWC Aquatimer Chronograph Edition “Sharks,” a limited edition of 500 pieces designed to draw attention to the threats facing the world’s shark population (an estimated 100 million sharks are killed every year for their meat, fins, liver, or gill rakers, according to conservationists). The timepiece pays homage to celebrity photographer and longtime IWC collaborator Michael Muller, who just published an enormous coffee table book with Taschen called Sharks. The $1,500 book comes in a metal case designed to evoke a shark cage—and is gifted to everyone who buys IWC’s special edition.

I knew better than to turn down the party invite. IWC is the watch industry’s host with the most—its parties are legendary. I knew this from personal experience, after attending the brand’s star-studded blowouts at the Salon International de la Haute Horlogerie in Geneva and at Art Basel in Miami Beach. Even Jim knew it. Last year, when Kern came to Los Angeles for the grand opening of the Rodeo Drive flagship, we joined him and a few dozen special guests for dinner at Spago. Actors Emily Ratajkowski and James Marsden popped by, as did Grammy-nominated singer and songwriter Aloe Blacc, who delighted our dinner party with a surprise performance.

Just like last year, the Aquatimer cocktail event on Thursday also carried on to Spago, where Jim and I dined on caviar, Wagyu beef, and chocolate bread pudding. Should you ever get an invite to party with IWC, say yes—and bring your appetite (not to mention your drinking liver!).

In early November, Richemont—parent company to IWC and a slew of prestige watchmakers, including Cartier, Panerai, and Jaeger-LeCoultre—announced a major executive restructuring. In addition to eliminating the position of group CEO in favor of a less centralized power structure, the luxury group named Kern head of watchmaking, marketing, and digital and Jérôme Lambert, CEO of Montblanc, the head of operations “responsible for central and regional services and all Maisons other than jewellery [sic] and watchmaking,” according to a statement.

If that’s not a ringing endorsement of Kern’s grip on the watch business, I don’t know what is. Watch this space to find out what happens at SIHH 2017, where I’m hoping to have a one-on-one interview with him.

Georges Kern, CEO of IWC and incoming head of watchmaking at Richemont

3. The Swiss company was founded by an American.

Unlike the rest of the Swiss watch industry, which is concentrated in the French-speaking part of Switzerland, IWC is headquartered in Schaffhausen, in the German-speaking part of the country. But that’s not the only thing that sets the company apart from its competitors. Founded in 1868 by a Bostonian named Florentine Ariosto Jones, IWC—which stands for the “International Watch Co.”—was among the first Swiss companies to incorporate the American system of watchmaking. Today, the brand continues to tout its Yankee heritage.

A decade ago, IWC started using the tagline “Engineered for me” to promote its watches, establishing a reputation for producing large, masculine timepieces with nary a diamond in sight. But during an interview with creative director Christian Knoop, who was in town for the Aquatimer event last week, I learned that the brand’s testosterone-fueled image only came to the fore after 2000, when IWC began to promote it.

To prove his point, Knoop brought out a tray of vintage ladies’ pieces dating from the early part of the 20th century to the 1980s and ’90s, including a few pieces on slinky metal bracelets as soft and smooth as fabric. He made clear that the brand would be devoting more attention to its female clientele in the years to come (a phenomenon I explored in this 2015 article for The New York Times).

5. In 2017, IWC is highlighting its five-decade-old Da Vinci collection.

At SIHH 2017, which opens on Jan. 16 in Geneva, IWC will unveil its revamped Da Vinci line, one of the brand’s six iconic collections. Created in 1968, when it was marketed as IWC’s first quartz timepiece, the barrel-shaped Da Vinci was redesigned in the 1980s with a round shape. That style helped the line grow into a best seller for both men and women, Knoop said.

But when IWC redesigned the Da Vinci yet again in 2007, back into a tonneau-shape style, the line lost its widespread popularity. IWC is poised to bring it back next year with a new, round shape that recalls the Da Vinci’s best-selling 1980s look with a contemporary spin.

‘Influence through emotion’ will drive luxury jewellery sales in 2018, new...