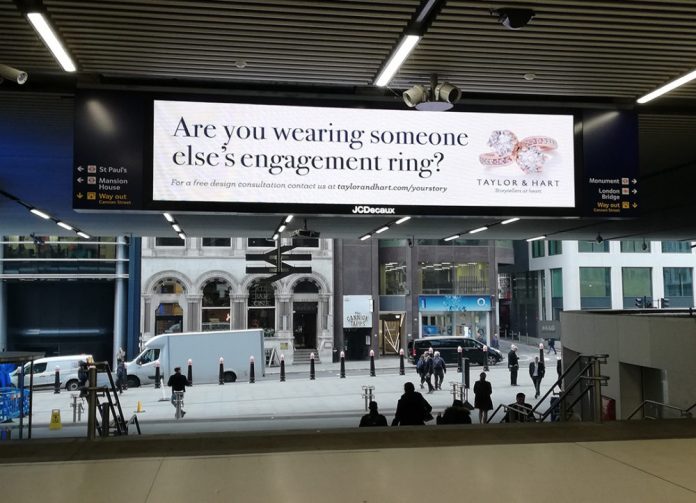 Placing large prints in hundreds of London underground locations, Taylor & Hart has asked the city’s lovers a simple, yet effective, question: “Are you wearing someone else’s engagement ring?”

Bespoke lies at the heart of the e-tailer’s business, and this question has certainly got commuters talking about the idea of creating a unique piece of jewellery which tells their story.

Under the bold question, the underground adverts feature a short excerpt which explains the story behind the company, and its ethos, and then asks: “Your relationship isn’t off the shelf, why should your engagement ring be?”

Taylor & Hart would be the first to admit this is a bold move for the company, with the chief executive officer revealing he was initially hesitant when the campaign was pitched.

However, while it is still early days, the campaign seems to have paid off, with Taylor & Hart witnessing a 50% increase in traffic.

“We weren’t sure at first,” admits chief executive officer, Nikolay Piriankov, who worked with investing firm Garage Soho on the campaign, “but then we felt as a company trying to disrupt the jewellery space it was important to take leaps of faith and try out messaging that’s very clear about what we do and what we believe in. So we went from being nervous to quite excited about having this message communicated.”

He continues: “We are really excited to see the results. So far we have had a massive uplift. We’ve had a 50% increase in traffic to the home page. More people are searching for Taylor & hart. And we know if we continue doing tube campaigns we will become known as a brand in London, and eventually asround the world, for empowering people to tell their own stories through beautoifully crafted pieces of jewellery.”

Taylor & Hart hopes the campaign captures the company’s heart for storytelling, and ability to turn a story into a piece of jewellery.

“We are here to enable people to tell their stories,” shares the CEO. “This is something that is very different about our brand because the technology and the process that we have are different from companies that say, ‘Here’s some jewellery we’ve designed, chose a piece’. We say, ‘Tell us about yourselves and what you would like, and about your partner, and we will try and create something that is truly special and personal to you’.”

Inspiration from the advert came from the likes of Jack Daniels, which often tells its own brand story within its campaigns.

Since the beginning of civilisation we’ve used jewellery to define who we are. Our beliefs, friendships, our family and our bonds.

And then we stopped creating it for ourselves.

We bought jewellery off the shelf. It was no longer our story. It became the jewellers’.

Who we bought it from became more important than the story it told.

At Taylor & Hart, we believe an engagement ring isn’t just a precious gift.

It should be a mark of your relationship, how you came together and fell in love. A story that can be handed down.

A ring no one else will be wearing.

Our years of experience have taught us that jewellery shouldn’t be about compromise.

Created from the finest materials and ethically-sourced precious gemstones and diamonds, our rings are exceptionally crafted, at a fair price.

Your relationship isn’t off the shelf, why should your engagement ring be?