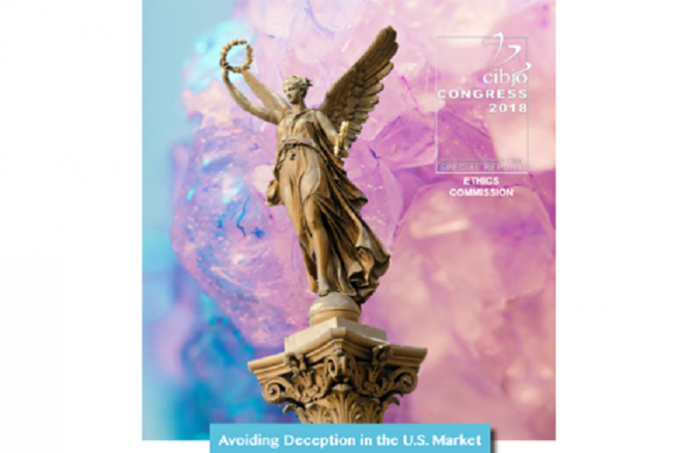 The CIBJO Ethics Commission will be holding an in-depth discussion on the potential impact across the global market of the revised FTC Guidelines recently released by the U.S. Federal Trade Commission, as well as other international standards applicable to the jewellery trade at the forthcoming 2018 CIBJO Congress to be held in Bogotá, Colombia, on October 15, 2018.

The organisation has released a Special Report, co-authored by Tiffany C. Stevens, head of the Ethics Commission and Sara E. Yood. It focuses exclusively on the newly revised FTC Guides for the Jewelry, Precious Metals, and Pewter Industries with brief comments on the ISO and CIBJO Blue Books, which are the other primary international standards of importance to the jewellery and gemstone sectors.

Addressing comments that had been heard in the jewellery industry that the FTC Guides seem to disregard harmonisation efforts made by the international trade, Stevens and Yood note that the primary focus of the American agency is somewhat different. “The FTC tries to harmonise its guidance with international standards when possible, but it must base its guidance on Section 5 of the FTC Act. In contrast, many international standards are developed through industry consensus-building processes that are based not on Section 5’s standards for preventing deception and unfairness, but rather other considerations, such as facilitating trade and promoting international cooperation,” they write.

“The FTC does not especially seek to harmonise global trade standards, but instead envisions its purpose as consumer protection in the United States,” they continue. “Be that as it may, the FTC Guides definitely have a global impact, hence the decision to focus upon them in this year’s Ethics Commission Special Report.”

The report presents an in-depth analysis of the various changes in the FTC Guides to facilitate the discussions at the Congress.