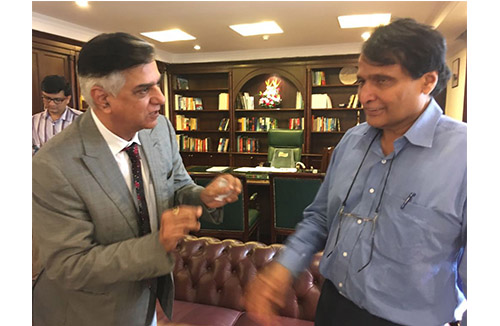 The recent Cabinet reshuffle by the Hon’ble Prime Minister Shri Narendra Modi has seen a change of guard at the Ministry of Commerce & Industry (MoC&I). It was this ministry which set up The Gem & Jewellery Export Promotion Council way back in the late 1960s; and though the Council functions autonomously, it broadly falls under the aegis of the MoC&I.

The Hon’ble Shri Suresh Prabhu, previously Minister for Railways has taken over the baton from the Hon’ble Smt Nirmala Sitharaman; who has now been allocated the portfolio of Defence, after her extremely successful stint at the MoC&I.

Shri Prabhu has had a long and illustrious career in his professional life and has many publications to his credit. He was Chairman of several societies; most notably, of the Saraswat Bank, a premier co-operative Bank of the country.