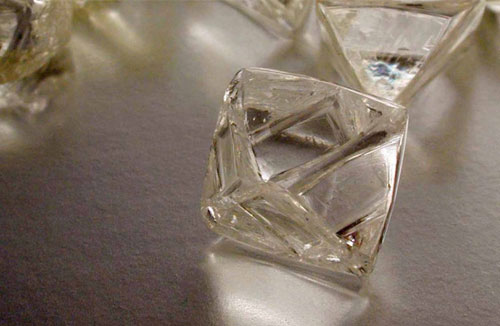 De Beers’ Preliminary Financial Results for 2017 – announced as part of the Anglo American results released today – indicate that the Company witnessed a 4% dip in revenue for the period. Total revenue for 2017 stood at US$ 5.8 billion as compared to a revenue of US$ 6.1 billion achieved in 2016.

However, the Company explained that this was “as expected, given the benefit of strong midstream restocking in the first half of 2016”.

The average rough diamond price realised also saw a decline by 13% to US$ 162 per carat as against US$ 187 per carat realised in 2016. This, De Beers said, was due mainly owing to a lower value mix. However, the Company pointed out that “this was partly offset by an 8% increase in consolidated sales volumes to 32.5 million carats” compared to 30.0 million carats sold in 2016.

“This reflected stronger demand for lower-value goods in Sight 1 of 2017, following a recovery from the initial impact of India’s demonetisation programme in late 2016, as well as the ramp-up of production from lower value per carat but high margin operations, including Orapa and Gahcho Kué,” De Beers stated. “The lower-value mix was compensated in part by a higher average rough price index, which was 3% above that of 2016.”

The Company’s underlying EBITDA however, increased by 2% to US$ 1,435 million as compared to US$ 1,406 million in the previous year.

“This performance was driven by improved margins, which benefited from lower unit costs (supported by higher production and efficiency drives across the business), a strong contribution from Canada (driven by Gahcho Kué’s ramp-up and the closure of Snap Lake), and Element Six (which benefited from a recovery in oil and gas markets),” explained De Beers. “This was partly offset by unfavourable exchange rates, and an increasing proportion of waste mining costs being expensed rather than capitalised, owing to an improved strip ratio at Venetia in South Africa.”

The Company was also able to report a 48% reduction in capital expenditure: from US$ 526 million in 2016 to US$ 273 million in 2017. This was achieved, mainly, as a result of the completion of major projects including Gahcho Kué; Debmarine Namibia’s new exploration and sampling vessel, the SS Nujoma; and planned lower waste capitalisation at Venetia. “The SS Nujoma, which was delivered three months ahead of schedule and under budget, was officially inaugurated in June 2017 and is fully operational,” the Company added.

De Beers’ production of rough diamonds increased by 22% to 33.5 million carats as compared to 27.3 million carats produced in the previous year; “reflecting stronger underlying trading conditions as well as the contribution from the ramp-up of Gahcho Kué”, the Company said.

In Botswana, Debswana’s production increased to 22.7 million carats; a growth of 11% over 20.5 million carats produced in 2016. “Production at Orapa was 28% higher, mainly driven by planned increases in plant performance and the ramp-up of Plant 1, which was previously on partial care and maintenance in response to trading conditions in late 2015,” the Company summed up. “In June 2017, Jwaneng processed its first ore from Cut-8, which is expected to become the mine’s main source of ore during 2018.”

Namdeb Holdings in Namibia increased its production by 15% to 1.8 million carats as compared to 1.6 million carats in 2016. This was primarily due to higher production from Debmarine Namibia’s Mafuta vessel, driven by higher mining rates following an extended scheduled in-port during 2016, De Beers stated; while at Namdeb’s land operations, production rose by 6%, despite challenging conditions.

In South Africa, DBCM’s production was higher by 23% reaching 5.2 million carats from 4.2 million carats produced in the previous year; “primarily owing to Venetia, driven by higher grades as well as improved operational performance benefiting tonnes treated”, the Company said. The Venetia Underground mine – which is under construction — is expected to become the mine’s principal source of production during 2023.

The ramp-up of Gahcho Kué, which commenced commercial production in March 2017, saw De Beers Canada, production increase to 3.8 million carats as against 1.0 million carats in 2016. “During the year, Gahcho Kué benefited from higher than expected grades, partly offset by a lower average value of production,” De Beers elaborated.

Production at Canada’s Victor mine increased by 21% to 0.7 million carats due to higher grades. In operation since 2008, Victoris due to close in 2019, when the open pit is expected to be depleted.

“Other revenue includes Element Six, which grew strongly, driven primarily by a recovery in the oil and gas business but also supported by the automotive and consumer electronics segments,” De Beers added.

The Company also delivered some happy prognostications. For one, De Beers said early signs show a positive growth for diamond jewellery in US dollar terms for the year 2017.

Diamond producers’ primary stocks are estimated to have “reduced considerably” during the first half of 2017, as a result of improved sentiment in the midstream and a return to the normalisation of rough and polished inventories in this segment of the value chain. “However, as a result of US retailers tightly managing their inventories and the earlier timing of Diwali in India, there was a slight seasonal build-up of polished inventory in the midstream going into the fourth quarter,” the Company said on a cautionary note.

De Beers was, however, optimistic about the performance of diamonds and diamond jewellery for the last season. “Overall, early indications are that additional consumer marketing undertaken during the main selling season had a positive effect on polished demand in the US, China and India in the final quarter of the year, leading to a positive impact on overall polished inventories.”

“With full ownership of the business (and the De Beers corporate brand), the process of integrating the DBJ brand and network of 30 stores in 16 key consumer markets around the world is well under way,” De Beers said.

The Company’s diamond brand Forevermark™ continued the expansion of its retailer network. As a result, Forevermark™ is now available in more than 2,200 outlets in 25 markets, an increase of 10% since the end of 2016.

“By May 2017, Forevermark™ had inscribed its two-millionth diamond, the second million having taken only half the time it took to inscribe the first million,” the Company noted.

The Company has also been making significant inroads on the research and development front. “In February 2017, De Beers unveiled its next-generation automated melée screening instrument (AMS2™), which is significantly less expensive, screens 10 times faster, can handle stones three times smaller, and has lower referral rates than its predecessor,” the Company anounced. “In addition, an industry-first synthetic-screening device for stones in set jewellery (SYNTHdetect™) was launched in June 2017, along with the roll-out by the International Institute of Diamond Grading & Research of a synthetics-detection training course.”

De Beers’s marketing spend fo 2017, at more than US$ 140 million, was 19% higher than in the previous year. This involved a combination of “proprietary and partnership activity” and was centred in the US, China and India. “De Beers also substantially increased its investment in the Diamond Producers Association, a producer-wide body that works to enhance consumer demand by promoting the appeal, integrity and reputation of diamonds,” the Company noted.

In 2017, De Beers also launched a new initiative – the development of a new digital platform for the diamond industry, backed by highly secure blockchain technology, which will provide a single immutable record for every diamond that is registered. “Currently in the pilot phase, this initiative is being designed to underpin confidence in diamonds and the diamond industry for all stakeholders, while streamlining existing manual processes and creating new efficiencies in the value chain,” De Beers emphasised.

“For 2018, forecast diamond production (on a 100% basis except Gahcho Kué on an attributable 51% basis) is expected to be in the range of 34-36 million carats, subject to trading conditions,” De Beers concluded.

Diamond
Russian diamond mining company Alrosa has reported a production of over nine million carats in the third quarter of 2020. This comes alongside a quarter-on-quarter...
- Advertisement -