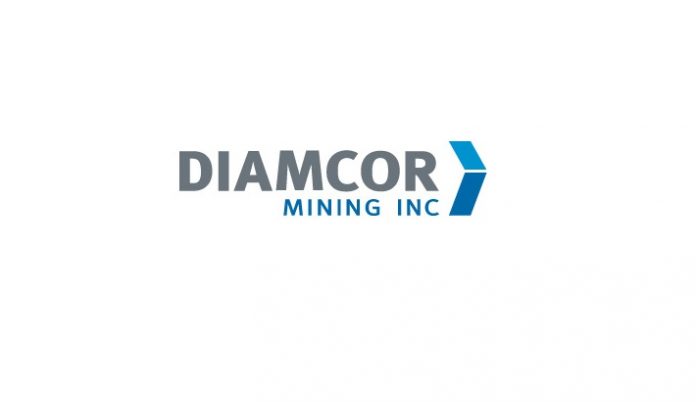 KELOWNA, December 2018 – Diamcor Mining Inc. (TSX-V.DMI / OTCQB-DMIFF), (the “Company”) is pleased to announce the results of its final tender and sale of rough diamonds for the Company’s third fiscal quarter ending December 31, 2018. The Company tendered 2,256.52 carats of rough diamonds recovered from resumed processing exercises at the Company’s Krone-Endora at Venetia Project (the “Project”), of which 1905.07 carats were sold for gross proceeds of USD $303,138.39, resulting in an average price of USD $158.60 per carat for the rough diamonds tendered and sold. The balance of 351.45 carats will be tendered along with additional rough diamonds delivered by the Company in January of 2019.

With this final tender of the fiscal quarter complete, total rough diamonds tendered and sold during the Company’s third fiscal quarter ending December 31, 2018, will be 7,162.21 carats, for gross proceeds of USD $1,401,322.01, resulting in an average price of USD $195.66 per carat for the period. This represents an increase of 64% in carats recovered and a 62% increase in revenues realized when compared to recoveries of 4,353.91 carats and revenues of USD $864,546.09 reported for the same period during the prior fiscal year. The average price per carat achieved was relatively unchanged year over year. Material processed during the current quarter consisted of smaller size fractions, with an increased percentage of larger size fractions being incorporated later in the quarter as part of the Company’s planned move to the processing of all size fractions through the recently upgraded facilities. In addition to the total rough diamonds tendered and sold during the quarter, the Company has delivered approximately 2,000 additional carats of rough diamonds (prior to acid wash) to Antwerp, which will be offered in upcoming tenders planned for early 2019.

Diamcor Mining Inc. is a fully reporting publicly traded junior diamond mining company which is listed on the TSX Venture Exchange under the symbol V.DMI, and on the OTC QB International under the symbol DMIFF. The Company has a well-established operational and production history in South Africa and extensive prior experience supplying rough diamonds to the world market.

About the Tiffany & Co. Alliance

The Company has established a long-term strategic alliance and first right of refusal with Tiffany & Co. Canada, a subsidiary of world-famous New York-based Tiffany & Co., to purchase up to 100% of the future production of rough diamonds from the Krone-Endora at Venetia Project at then-current prices to be determined by the parties on an ongoing basis. In conjunction with this first right of refusal, Tiffany & Co. Canada also provided the Company with financing to advance the Project. Tiffany & Co. is a publicly traded company which is listed on the New York Stock Exchange under the symbol TIF. For additional information on Tiffany & Co., please visit their website at www.tiffany.com.

In February 2011, Diamcor acquired the Krone-Endora at Venetia Project from De Beers Consolidated Mines Limited, consisting of the prospecting rights over the farms Krone 104 and Endora 66, which represent a combined surface area of approximately 5,888 hectares directly adjacent to De Beers’ flagship Venetia Diamond Mine in South Africa. On September 11, 2014, the Company announced that the South African Department of Mineral Resources had granted a Mining Right for the Krone-Endora at Venetia Project encompassing 657.71 hectares of the Project’s total area of 5,888 hectares. The Company has also submitted an application for a mining right over the remaining areas of the Project. The deposits which occur on the properties of Krone and Endora have been identified as a higher-grade “Alluvial” basal deposit which is covered by a lower-grade upper “Eluvial” deposit. The deposits are proposed to be the result of the direct-shift (in respect to the “Eluvial” deposit) and erosion (in respect to the “Alluvial” deposit) of material from the higher grounds of the adjacent Venetia Kimberlite areas. The deposits on Krone-Endora occur in two layers with a maximum total depth of approximately 15.0 meters from surface to bedrock, allowing for a very low-cost mining operation to be employed with the potential for near-term diamond production from a known high-quality source. Krone-Endora also benefits from the significant development of infrastructure and services already in place due to its location directly adjacent to the Venetia Mine.