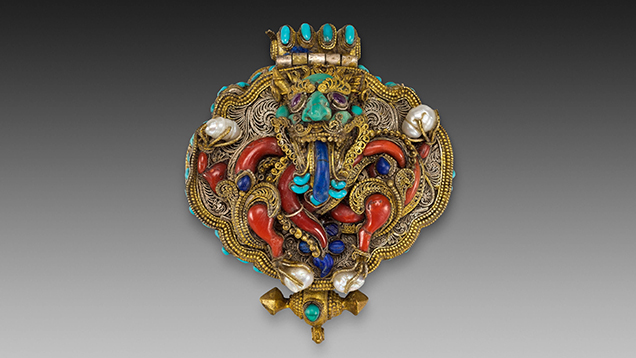 Sweepingly Pan-Asian, Vanishing Beauty: Asian Jewelry and Ritual Objects from the Barbara and David Kipper Collection is currently on exhibit at the Chicago Art Institute. Consisting of more than three hundred objects, the exhibition is part of a promised gift to the museum and focuses largely on marginalized outlying Asian cultures. Encompassing many religions and cultures, artifacts ranging from textiles to elaborate jewels that belonged to monks, officials, and laypeople of all social statuses, it is a dazzling collection of gem-set items.

The entire Kippers collection is comprised of more than 1300 items, most of it displayed in their Chicago home. “I turned down double the number of items I collected over the years,” said Mrs. Kipper, who is a professional photographer. From the start, her collection was based “on whether something spoke to me in a visceral and visual way, as opposed to any intellectual approach.” As she and her husband David traveled the world, they saw the cultures she had experienced on her first Asian trip in the 1960s giving way to modernity and geopolitical changes. At that point she took on a greater mission: to preserve the artifacts for posterity.

The Silk Road, the ancient trade route leading from the Mediterranean Sea to China and India, brought gems, pearls, and glass to Asia, where these prized foreign commodities were combined with local material in spiritual and personal objects (figure 1).

Throughout Asia, turquoise is commonly used in jewelry and ritual objects. About 70% of the gems used in Tibetan jewelry are turquoise, as the material has great spiritual meaning. Tibetan medicine ascribed a range of healing properties to turquoise as well, ranging from an antidote for poisoning to curing liver ailments. In Central Asia, turquoise was a symbol of chastity and purity, and was associated with prosperity, piety, and courage. The turquoise mined in Tibet and China was mostly in shades of green, and was used in jewelry and ritual objects for average folk. The vivid blue variety from Iran was more desirable, and the Persian material takes center stage in many of the more elaborate items for the highborn and powerful. The jantar in figure 2 is one example.

While most of the items on display combine turquoise with emeralds, sapphires, rubies, amber, coral, carnelian, and pearls, colored glass and plastic beads are featured as well. As rare commodities from the west, their vibrancy and reflective qualities were important to these pieces both for their value and their spiritual potency. Healing, luck, and other protective qualities were ascribed to the various stones. To the Tajik and Uzbek people, coral was was believed to strengthen the eyes and heart and protect against forgetfulness and stomach ailments. And the Prophet Mohammad mentioned that carnelian (also called sard) protects against poverty and insures happiness.

The metals in which the gems were set were as wide ranging as the cultures; in fact, certain metals were specified in religious texts and traditions. Depending on the use, and the status of the person using it, the metal could be silver, gilt copper, gilt iron, or gold. Whether the metal was cast or chased, granulated or worked in repousse, the craftsmen who created the items were engaged in a holy endeavor, and the most talented gold and silversmiths were highly revered and sought-after.

A particularly strong assemblage within the collection are the amulet boxes, or gaus, which range from small, simple designs to large and opulent pieces; an example is seen in figure 1. These amulet boxes are common to many, if not most, Asian cultures. The gau is worn around the neck, or sewn or attached to clothing or headwear as a portable shrine, to ward off evil spirits. They may also be used to invoke auspicious spirits, to honor teachers or deities, or to carry religious relics. The Kipper collection is particularly rich in Himalayan gaus, created in gold, silver, iron, and copper, and frequently set with gems.  One gau (again, see figure 1), crafted from filigreed gilt silver, is set with pearls, coral, lapis lazuli, and rubies, and features the auspicious guardian monster Kīrtimukha  (also known as Face of Glory), whose claws delicately hold the natural pearls.

Another sort of amulet case is the jantar, which is similar to a gau, but without a hollow place for an amulet. The jantar in figure 2, showing a Buddhist goddess, is designed as a necklace for a Nepalese woman who revered this goddess. Carved turquoise is inlaid, alongside bezel-set rubies, corals, pearls, emeralds, and sapphires, with granulation and rope edge details.

The Kippers were avid collectors of headdresses from all over Asia; these pieces were executed in a wide variety of materials and diverse imagery. A particularly interesting comparison is made between a grouping of refined Chinese Imperial headwear fashioned in kingfisher feathers, the vibrantly turquoise and indigo creations, and the wildly gaudy silver headdresses of the southwestern Chinese minorities. Both share imagery of flora and fauna, but the rarity of materials used and ultimate expression, as well as their stations in life are quite different.

There are crowns for Tibetan oracles and priests, as well as ornate crowns for statues, all crafted in gilt copper with elaborate chasing and engraving. A Tantric priest’s crown has pigmented decoration above the abstracted riot of skulls (figure 3). The crown also features skulls, more fearsome with large red glass set into their eyes, offset by decorative placement of flat turquoise ovals. The Repousse gilt copper diadem incorporates floral elements of cabochon ruby centers surrounded by turquoise petals.

A wide variety of earrings are in the collection, including a pair of Indonesian togé (figure 4). These earrings are made from finely granulated gold to simulate the snakeskin texture of a Naga, the mythological snake deity of rain and fertility. Earrings such as these would be worn by young women of marriageable age

The show is dazzling and informative. The museum’s effort to mount this exhibit took more than a year, involving the services of a gemologist to confirm gem identities, extensive conservation efforts, and photography. The exhibition creates context with film, soundscapes, and vintage photographs to enhance the visitor’s experience. Mrs. Kipper’s own photographs, which show how the items were worn within each culture, are also provided. The curatorial groupings allow wonderful comparisons for this jeweled ethnographic travelogue. Vanishing Beauty is sure to please any visitor, but is especially wonderful for gem lovers.

After the exhibition ends in August 2016, fifty to sixty items from the Barbara and David Kipper Collection will be on rotating display for the next ten to fifteen years. The Himalayan material will be the first group to be displayed.

Vanishing Beauty: Asian Jewelry and Ritual Objects from the Barbara and David Kipper Collectionis on view through Sunday, August 21, 2016. The Art Institute of Chicago, at 111 Michigan Avenue in downtown Chicago, is open daily 10:30–5:00, Thursday until 8:00 p.m. General admission is $25 for adults; admission for seniors, students, and teenagers from 14–17 is $19. Children under 14 are free.

Lumière: An Extravagant Night of Dazzling Jewels by Swarovski | The...