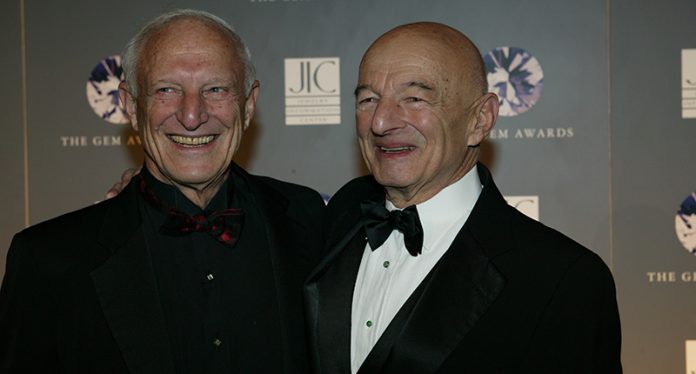 Rear Adm. Herbert M. “Herb” Bridge, who took over Ben Bridge Jeweler and helped expand it into a nationwide chain that caught the eye of Warren Buffett, died April 2. He was 93.

According to a profile in the University of Washington alumni magazine, Bridge joined the United States Navy in 1942 and saw action in World War II.

When he returned home, he was drafted into another kind of service, in the family business. As he told the Puget Sound Business Journal, his father Ben, the company’s namesake, didn’t give him much of a choice.

“When I came home from World War II and had my officer’s commission and my fancy gold stripe, I thought I was pretty hot stuff. My father took one look at me and said, ‘Herb, that’s a nice looking uniform you have on. Now, why don’t you hang it up and get this place swept out. It hasn’t been really clean since you left.’”

“That was a career consultation, Ben Bridge style,” he told Historylink.org. “You did what you were told.”

At one point. Herb made up his mind to leave the business. In response, his father said he was retiring from the company, tossing his keys on the table and leaving Herb and his brother to run things.

For a time, the two brothers became very successful managing J.C. Penney’s jewelry departments. But eventually they set upon expanding the flagship store, expanding into dozens of outlets. Herb later credited the firm’s early grasp of computers for the retailer’s quick growth.

“[We] wrote our own programs, which ultimately we sold to noncompeting jewelry stores because they were good, they’re still very useful programs,” he told the Washington State Jewish Historic Society in 2000. “Because of fast resupply, fast replenishment, that sort of thing, it’s enabled us to be so much larger.”

In 2000, Berkshire Hathaway bought the company, retaining the two brothers as co-chairmen.

He was also active in Democratic politics, as well as his local community in Seattle and the United Way.

Bridge racked up many honors from his time in the industry. He previously served as chair of the AGS board of trustees and in 2003, the American Gem Society gave him its Robert M. Shipley Award, its highest honor. He also won its Triple Zero award in 2000 and in 2012, he won the award again, along with his family. In 2008, he was honored by the 24 Karat Club of Southern California for his years of industry service.

Lisa Bridge, current president and chief operating officer of Ben Bridge, eulogized her great uncle on Instagram as someone who “always remembered people and spoke with a unique care, humor, and twinkle in his eye.

“That was Herb, he taught us to invest time and energy into our community and everyone we came in to contact with,” she wrote. “I am thankful to have had such a loving, wonderful role model in my life and I will strive to live a life in his honor.”

He is survived by sons Dan and Jon, who recently retired as Ben Bridge co-CEO; four grandchildren; five great-grandchildren; and partner Edie Hilliard.