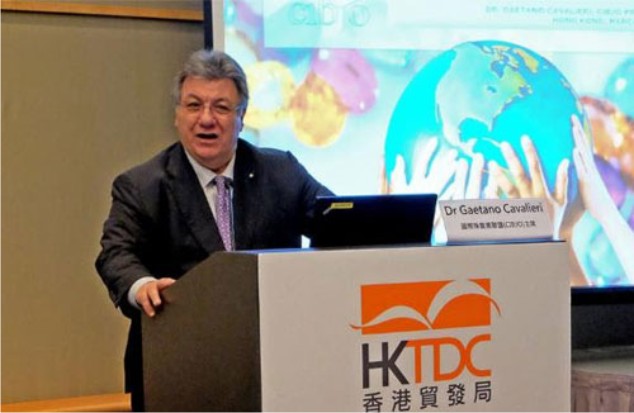 CIBJO President Dr. Gaetano Cavalieri, when addressing an industry seminar on March 3, at the Hong Kong International Jewellery Show organised by the Gemmological Association of Hong Kong and the Innovation and Technology Commission of the Hong Kong SAR Government, called upon both government authorities and gemstone trade bodies to adopt the standards and nomenclatures as enunciated in the CIBJO Blue Books. He urged that they incorporate them in their respective relevant national guidelines. Doing this, he said, would “facilitate a more transparent and efficient international trade”.

The CIBJO Blue Books are definitive sets of grading standards and nomenclature for diamonds, coloured gemstones, pearls, coral, precious metals, and gemmological laboratories. They are compiled and are consistently updated by relevant CIBJO Commissions, whose members include representatives of trade organisations and laboratories active in the diamond, coloured gemstone, pearl, precious metals and jewellery industries.

“It is essential because we work in an industry where there is almost no single item produced that does not include elements that were either mined, processed and manufactured in multiple countries,” Dr. Cavalieri said. “What this means is that gemstones, jewellery components and complete jewellery items are constantly crossing borders, and are being handled and valued by different people in each of the countries they pass through. It is absolutely essential that members of our industry in one country can communicate accurately with their colleagues in other countries, using a common professional language.”

Though the application of the Blue Books is voluntary, Dr. Cavalieri noted that they are increasingly gaining recognition as common standards.

He cited some milestones in this process. As outlined by CIBJO in a press release, these high points are:

In 2004 a German district court used terminology and definitions contained in CIBJO’s Diamond Book to decide a case involving misrepresentation of synthetic diamonds, the first time the Blue Books were cited in European case law.
In 2013 CIBJO’s Blue Book standards for pearls and precious metals were accepted as national standards in the Philippines.
In 2015, the International Standards Organisation approved ISO International Standard 18323, which for specifies a set of permitted descriptors for the diamond industry. The new standard mirrored almost exactly the existing definitions outlined in CIBJO’s Diamond Blue Book.
In 2017, CIBJO, the World Federation of Diamond Bourses and the International Diamond Manufacturers Association reached agreement, by which the nomenclature used by the International Diamond Council (IDC) will be harmonised with that of CIBJO’s Diamond Blue Book. As a result, the CIBJO Diamond Book now functions as the single official reference book for nomenclature in the entire diamond and jewellery industry.
In January 2018 an MOU was signed with the Russian government aimed at harmonising the system used in that country for the classification of polished diamonds with the CIBJO Blue Book.
“The process of developing the Blue Books is remarkable, and is a testament to the dedication, professionalism, expertise and voluntary spirit of members of our community,” Dr. Cavalieri said.

He called upon members of the industry in Hong Kong and China, to work with CIBJO to expand the relevance to more countries and product categories, including Fei Cui, which involves jade and jadeite materials that are popular in the region.

“The CIBJO Commissions that compile and update the CIBJO Blue Books do not work in isolation,” he stated. “They are made up of industry members, like yourselves, who are ready to contribute. Members of the Hong Kong and Chinese industries have long played key roles in our commission, and this practice needs to continue.”