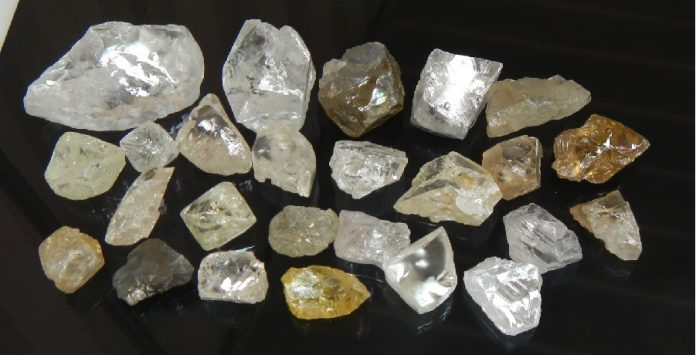 The Company is currently engaged in mining activities at the Lulo mine in Angola in association with its local partner and the government under the banner of Sociedade Mineira Do Lulo (SML), besides development of the Mothae mine in Lesotho and exploration activity at the F project area of the Orapa kimberlite in Botswana and at the Brookings project in Australia. The focus is on expanding high-value diamond production from multiple sources.

The Company said that the Lulo mine continued to regularly produce large and premium-value diamonds throughout the quarter with the recover of 58 diamonds weighing more than 10.8 carats). This included two +100 carat diamonds (116 carats and 103 carats), taking to 10 the total number of +100 carat diamonds recovered to date from Lulo.

Diamond grade improved 26% to 7.3 carats per 100 cubic metres, though throughput was down by 13%, primarily a result of the extremely heavy rain that fell during this Angolan wet season, which generally finishes in April.

At the quarter end, SML reported a US$13.1m cash balance and a closing diamond inventory of 3,047 carats.

At the Mothae project, construction of new 150 tonnes per hour diamond plant with XRT large-diamond recovery technology was on the budget and on schedule for H2 2018 commissioning.

News & Trends
VM and Events have announced the launch of its new website, through which users can browse its services and visual merchandising portfolio. The brand helps...
- Advertisement -

GIA and Princeton University Collaborate on Research for Secure Communications