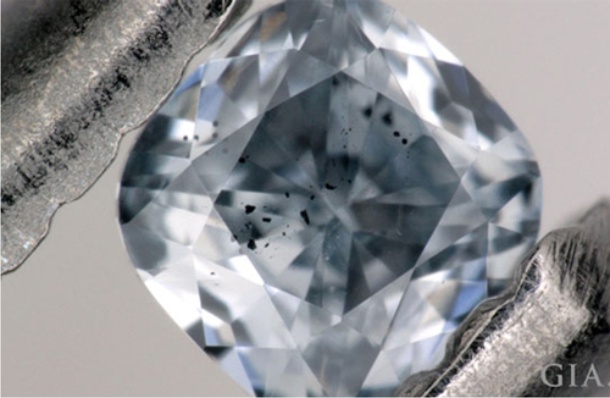 A team of leading gemmologists and scientists from different international institutions have released research that indicates that blue diamonds are “superdeep” diamonds, meaning they crystallized much deeper in the earth than most other gem diamonds. Their findings were published in an article in the latest issue of the journal ‘Nature’, with GIA Research Scientist Evan Smith as the lead author.

The study has further revealed that the rare Type IIb diamonds which have a blue hue because of presence of boron within their crystalline structure were not only formed at a far greater depth than most other diamonds, but that the boron atoms contained in them may have originally been derived from ancient oceans.

In an article on the GIA website, Smith writes that the boron content of type IIb diamonds has been “unexpected and challenging to explain” due to the fact that concentration of this element in the Earth’s mantle, where diamonds usually grow, is extremely low. Inaccessibility to blue diamonds due to their high value and rarity has further made the task of researchers difficult, and the near lack of mineral inclusions have been a further hurdle.

However, through systematic screening of diamonds submitted to GIA over two years, 46 type IIb diamonds with inclusions were found and studied, and the research team was able to deduce the host rock and depth where the diamonds grew. They concluded that as the minerals identified in these inclusions are only found together at extremely high pressures, very deep in the earth, they were probably formed approximately four times deeper than most other kinds of diamonds.

Study of the inclusions also showed that they grew in the presence of ocean crust which was carried down to the lower mantle by the conveyor-belt-like process of subduction and suggests that the boron responsible for the blue color in type IIb diamonds, may have been carried down from the earth’s surface.

Until recently, it was widely held that superdeep diamonds are always small and never of gem quality. But, the new study reveals not only that type IIb diamonds are among the deepest diamonds ever found, but also that boron and maybe even water can be carried from the ocean deep into the mantle by the process of subduction.

This new finding, in addition to the 2016 finding that relatively large and pure (CLIPPIR) diamonds are also superdeep, indicates that many of the world’s most expensive and dazzling gem diamonds are indeed superdeep diamonds, the researchers concluded.

Pic caption: Blue boron-bearing diamond, with dark inclusions of a mineral called ferropericlase that were examined as part of this study. This gem weighs 0.03 carats. Photo by Evan M. Smith, Courtesy GIA