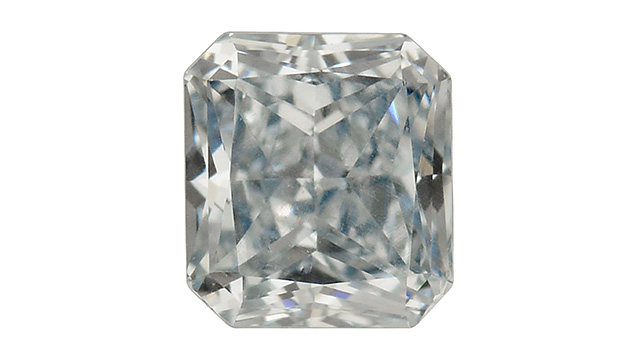 GIA researchers have reported the discovery of a synthetic CVD overgrowth on a natural diamond which resulted in the stone being graded as a 0.33 ct Fancy blue. The research team said that this is the first time that the lab has come across such a case.

The unusual presence of both nitrogen and boron defects in a single stone led the team to investigate further. With the help of DiamondView images, they discovered that there were other unusual phenomena such as the infrared spectrum revealed a mixed type Ia and IIb diamond; there was yellowish green fluorescence in the face-up view, blue fluorescence in the face-down view and a yellowish green fluorescence zone at the top of the crown with a sharp boundary in the crown facets.

The report stated that the combination of SiV– defects, a sharp boundary, yellowish green fluorescence, and phosphorescence suggested that the top layer was CVD synthetic diamond. The bottom diamond showed blue fluorescence but no phosphorescence in the DiamondView, consistent with natural type Ia diamond. A distinct boundary line could be observed along the interface layer on the crown facets and a cloud-like inclusion, trapped at the interface layer, was also observed, as well as a dark needle located at or near the interface. A small stress halo and a natural surface could be observed in the bottom diamond. The strain pattern throughout the pavilion was consistent with natural type Ia diamond.

Concluding that this rare stone had a Type IIb CVD synthetic diamond as an overgrowth on a Type Ia natural diamond, the GIA team said, ”Identification of colored diamonds should be performed very carefully by looking for unusual characteristics, such as a straight boundary line associated with an interface plane, and fluorescence zones with sharp edges in DiamondView images. Examination of this fancy-colored composite diamond indicated that similar challenges could exist for colorless and near-colorless diamonds.”

The paper has been authored by Kyaw Soe Moe, Paul Johnson, and Ulrika D’Haenens-Johansson, researchers at GIA’s New York laboratory and Wuyi Wang, GIA’s director of research and development.