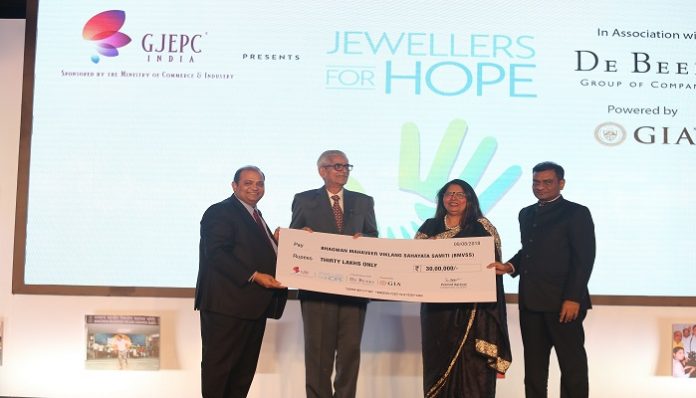 Contributes Rs 1 crore for preventing exploitation of the child 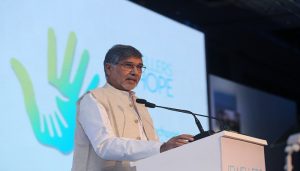 Mumbai, August, 2018:  The Gem &amp; Jewellery Export Promotion Council (GJEPC), in association with De Beers and Powered by Gemological Institute of America (GIA),
presented the fourth edition of ‘Jewellers for Hope’ on August 9. A gala charity dinner with an avowed objective to collaborate and contribute for the larger cause of preventing the exploitation of the child and as well support the cause of the physically disadvantaged people at large. Mr. Kailash Satyarthi, Nobel Prize Winner; social activist Ms. Shaina NC; Padma Bhushan recipient Dr. D. R. Mehta and Bollywood icons Shilpa Shetty and Manisha Koirala along with cricketer Zaheer Khan, graced the occasion.

This year the industry has earmarked funds to support three leading NGOs – Voluntary Action Association run by Nobel Prize winner Mr. Kailash Satyarthi which works with a mission to end all forms of exploitation of children in India; Giants Welfare Association run by Social Activist Ms. Shaina NC, which supports, maintains and assists promotion of social services and projects in India and abroad and Bhagwan Mahaveer Viklang Sahayta Samiti or Jaipur Foot run under the supervision of PadmaBhushan Recipient, Dr. D.R. Mehta assisting the disabled by way of providing for artificial limbs, calipers and other aids for free. The event was hosted and curated by the inimitable Cyrus Broacha.

Mr. Pramod Agrawal, Chairman, GJEPC addressing the distinguished guests said, the gem &amp;jewellery industry has an impressive history of contributing generously to
the development and betterment of the society, in its individual capacity and collectively. “Jewellers for Hope” is an initiative where the industry comes together for a common cause, contributing beyond its community to serve one and all. And this year we are happy to contribute and join hands for the causes that Mr. KailashSatyarthi; Ms. Shaina NC, and Dr. D.R. Mehta have been working for. Thanks to all the donors for their generous contribution whose support will help make a difference in the lives of many.”

The Chief Guest, Mr. Paul Rowley, Executive Vice President, Diamond Trading &amp; Distribution, De Beers Group, said, “Diamonds are the ultimate symbol of love and
these miracles of nature have given hope to so many people across world. Diamond industry in India has been doing tremendous work in education, health and uplifting
the marginalized sections of the society. De Beers has always been committed to welfare of its stakeholders and society. We are happy to partner with GJEPC for the Charity event that gives hope to the underprivileged and empowers the children, women and people in a great manner.”

Mr. Colin Shah, Vice Chairman, GJEPC, said, “We are thankful for the support received from ourgem and jewellery partners and I am confident that we shall be also working towards improving the living standards of workers who remain the backbone of this industry. Through Swasthya Ratna, a group medical policy, GJPEC has insured 3 lakh lives since 2015. As jewelers we have a heart of gold and am happy that our Industry is poised to make a slew of positive contributions to the society.”

In 2014, “Jewellers for Hope” associated with “Make A Wish Foundation” to fulfil wishes of 1700 destitute children. In 2016, Jewellers for Hope donated to “Swades Foundation and Friends of Tribal Society which helped 4560 lives giving access to drinking water to rural household, and built household toilets in the community and educated 7224 students. And in 2017, Jewllers for Hope extended its contribution to three NGOs, namely Nanhi Kali, Girl Rising and Make a Wish Foundation; this contribution helped to improve the lives of 1166 children; 20044 girls were educated, 540 wishes granted.

NGOs with whom the Jewellers for Hope is associated this year has done an excellent job in their respective fields. Voluntary Action Association/ Bachpan Bachao Andolan has directly rescued over 86,500 children from extreme conditions of child abuse. Giants Welfare International has successfully completed Giants Blood Donation drive with approximately 1000 Blood donation camps organized by different Giants Groups spread all over India during 14th – 30th June 2018. Bhagwan Mahaveer Viklang Sahayta Samiti (BMVSS) or Jaipur Foot provides artificial limbs, calipers, wheelchairs, hand paddled tricycles, crutches and other aids and appliances to the handicapped to over 85,000 disabled in a year. BMVSS has already rehabilitated more than 1.70 million disabled by now.

About GJEPC: The Gem &amp; Jewellery Export Promotion Council (GJEPC) was set up by the Ministry of Commerce and industry, Government of India (GoI) in 1966. It was
one of several Export Promotion Councils (EPCs) launched by the Indian Government, to boost the country’s export thrust, when India’s post-Independence economy began
making forays in the international markets. Since 1998, the GJEPC has been granted autonomous status. The GJEPC is the apex body of the gems &amp; jewellery industry
and today it represents over 6,000 exporters in the sector. With headquarters in Mumbai, the GJEPC has Regional Offices in New Delhi, Kolkata, Chennai, Surat and Jaipur, all of which are major centres for the industry. It thus has a wide reach and is able to have a closer interaction with members to serve them in a direct and more meaningful manner. Over the past decades, the GJEPC has emerged as one of the most active EPCs, and has continuously strived to both expand its reach and depth in its promotional activities as well as widen and increase services to its members. 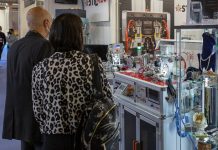 IEG: T.GOLD 2023 Expands its Showcase of Jewellery Technologies and Machinery 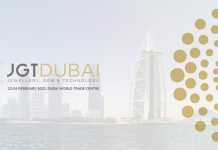 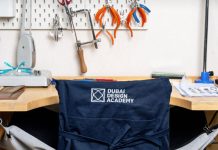