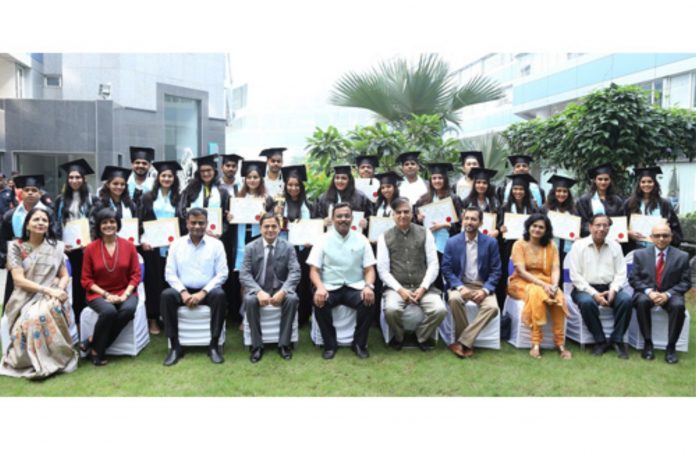 Hon’ble Minister of School Education, Higher & Technical Education, Govt. of Maharashtra, Shri Vinod Tawde promised the gem and jewellery industry that the state government would definitely support its efforts to set up a specialised G&J University headquartered in Maharashtra. He also said that the government would ensure that the the Three Year Degree course in Jewellery Design & Manufacturing Techniques would receive recognition from the Mumbai University.

Shri Tawde was speaking as Chief Guest at the 11th Convocation ceremony of the India Institute of Gems and Jewellery (IIGJ), Mumbai held in the premises of the Bharat Diamond Bourse on Saturday, December 9, 2017, where the 23 students who had just completed their three-year degree course were felicitated. He added that the government appreciated the importance of the industry and its contribution to the state and the country, and expressed the hope that the new thrust on modernising and developing the jewellery industry would help create a large number of jobs within the state.

“Our government values courses and institutes that are training students in specific skills related to needs of industry,” Shri Tawde said, and urged the GJEPC and IIGJ to develop a “curriculum with local relevance to the conditions in our country that is on par with international standards, and teaches innovation and critical thinking rather than the copy-paste method of learning.” He added that the aim should be for IIGJ to become as desired an institution of higher learning as the IITs and IIMs across India.

Congratulating the students, Shri Tawde said that the graduation ceremony was the symbolic end of their link with their gurus. “Set you amibitions high and let the sky be the limit,” he advised them, “but remain rooted in the reality that is India.”

While Bhansali and Mehta outlined the history of IIGJ, the perspective with which it took shape and the many achievements of the institute and its students, Pandya stressed the need to take gem and jewellery education in India to a higher level while creating a cadre of personnel with industry-specific training and skills.

In his Welcome Address, Bhansali stated that this was the first time that a minister, and that too the minister for higher and technical education had been the chief guest at an IIGJ convocation, adding, “This in itself reflects the importance and status that IIGJ has achieved and the commitment of the government to boost skill training.”

Mehta said that the institute had set up with the generous support of the industry in Mumbai and had later expanded to Delhi, Jaipur and Kolkata with backing both from industry players and the respective governments. “Recognition of IIGJ’s degree course by a prestigious body like Mumbai University was necessary, and it would make the course more attractive to the best talent in the country,” Bhansali concluded.

Linking the setting up of a full-fledged G&J university to the country’s vision to make India the leading jewellery manufacturer in the world with US$ 25 billion worth of exports by 2025, Pandya said, “Even the top managers of some of the biggest retailers of diamond jewellery worldwide like Signet and Walmart have had to learn about jewellery while on the job; there is immense scope for specially trained managers who have deep knowledge of every aspect of the business, be it design, manufacture or finance, not just within the country, but internationally too.”